The picture from Day #3 was especially difficult for me. Although I absolutely adore Darkwing Duck, I never watched Ducktales, and I didn't know much about the characters. I had to watch some clips on Youtube to really get a sense of the ducks' personalities. I hope I got it right! 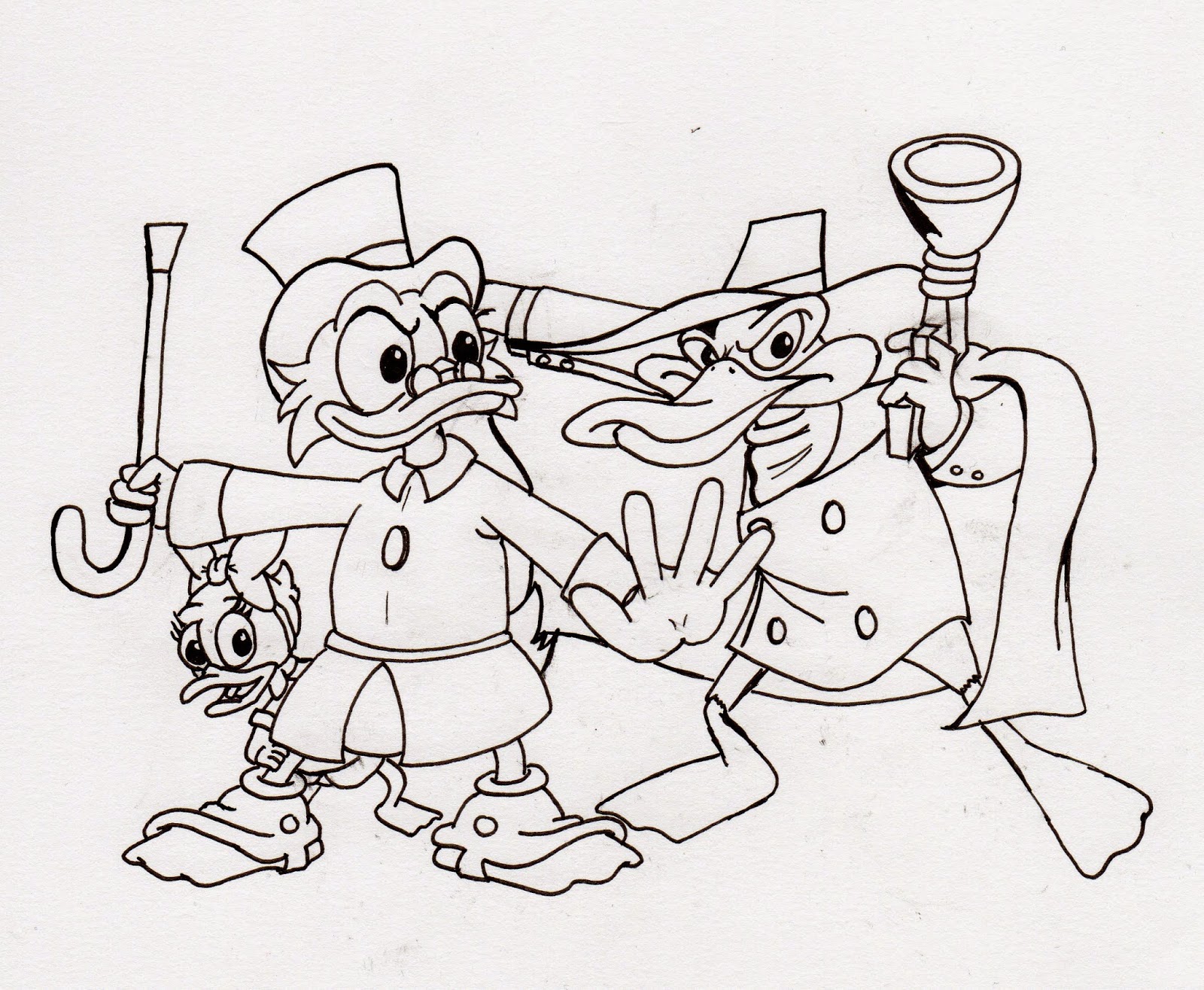 Webby carried a bag full of party supplies to the table she'd set up in the garden. "Here we are." She set the bag on the ground and began unpacking her tea pot, cups, and plates full of little cakes and sandwiches. "A perfect tea party for two."

She finished setting the table and sat back with a smile. But her Quacky Patch doll wasn't on the chair where Webby had left her only moments ago.

Dropping to the ground, Webby searched under the table, behind the bushes and even in the bag she had just emptied. No Quacky Patch doll.

"Now, where did you run off to?" Webby wondered. She searched throughout the garden, the kitchen, and even in Uncle Scrooge's treasure vault. But her Quacky Patch doll was nowhere to be found.

Suddenly, a puff of smoke appeared next to her tea table, and from inside the cloud, a voice called out, "I am the terror that flaps in the night! I am the ingrown toenail on the foot of crime. I am Darkwing Duck!"

When the smoke cleared, a duck in a purple cape and mask, with a big, floppy hat, smiled at her. Webby stomped on his foot and called to Uncle Scrooge, who came running from the airplane hanger beside the house, his goofy pilot, Launchpad McQuack trailing behind him.

"Ouch!" The caped duck hopped on one foot, rubbing his sore toes. "What did you do that for?"

"You said you were going to give me nightmares," said Webby. "What did you do with my Quacky Patch doll?"

"Oh, hey, Darkwing," said Launchpad. He scooped the strange duck into a giant squish hug and twirled him around. "What brings you to Duckberg?"

Darkwing grunted and flailed his arms until Launchpad finally released him. He took a giant, gasping gulp of air before he spoke. "I've tracked the Bedtime Bandit all the way from St. Canard. He's been stealing baby dolls across the midwest, the southeast, and even a small corner of the north. No doubt for strange and nefarious purposes."

He glanced around the yard, and then took off at a sprint, shooting one smoke bomb after another from his gun. "Suck gas, evildoer!"

He pounced on a shadowy figure in the bushes beside the house and emerged moments later, coughing and hacking, but holding the shirt collar of a bedraggled villain in one hand and Webby's Quacky Patch doll in the other. He handed the doll to Webby and blushed when she wrapped her arms around his legs in a grateful hug.

"Aww, it was nothing," he said. "Just doing my job." And with a flash of smoke, he disappeared again.
Posted by Veronica Bartles at 3:18 PM