It's almost Valentine's Day, and love is in the air.
And what better way to celebrate than with a boatload of fabulous books? Some of my favorite authors and I want to give you a present this Valentine's Day! Scroll down to the Rafflecopter form at the bottom of this post to enter one of TWO big bundles of eBooks.

There's a YA bundle: 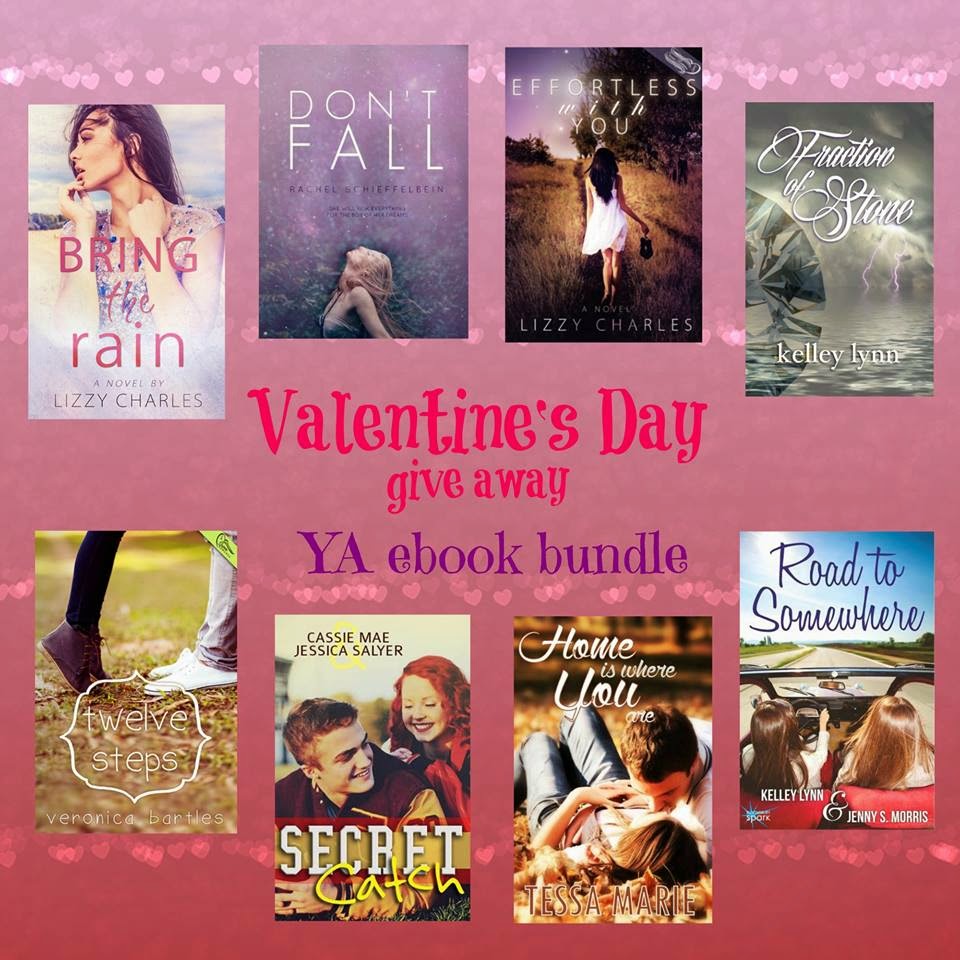 including TWELVE STEPS (my own debut novel), EFFORTLESS WITH YOU and BRING THE RAIN by Lizzy Charles, DON'T FALL by Rachel Schieffelbein, ROAD TO SOMEWHERE by Kelly Lynn & Jenny S. Morris, SECRET CATCH by Cassie Mae and Jessica Salyer, HOME IS WHERE YOU ARE by Tessa Marie, and FRACTION OF STONE by Kelley Lynn

... and an NA/Adult romance bundle: 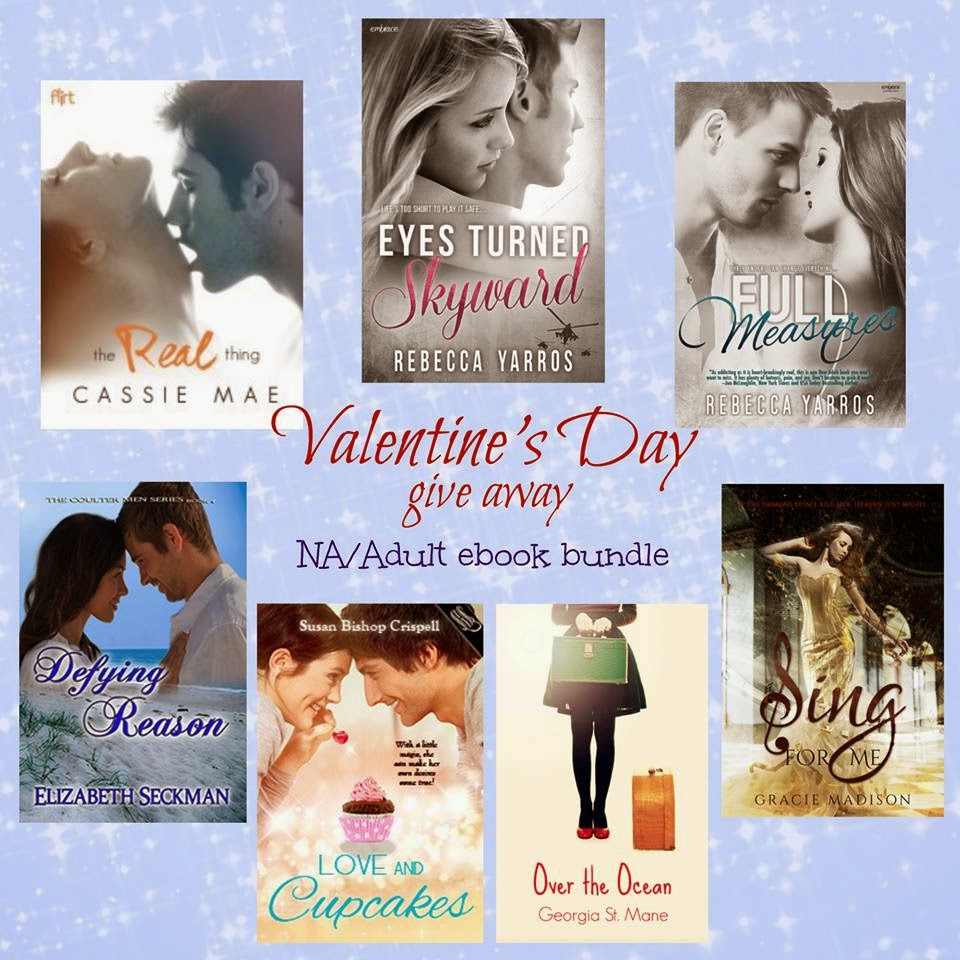 THE REAL THING by Cassie Mae, EYES TURNED SKYWARD and FULL MEASURES by Rebecca Yarros, DEFYING REASON by Elizabeth Seckman, LOVE AND CUPCAKES by Susan Bishop Crispell, OVER THE OCEAN by Georgia St. Mane, and SING FOR ME by Gracie Madison


You definitely want to enter this giveaway!! I can personally recommend DON'T FALL, EFFORTLESS WITH YOU, and LOVE AND CUPCAKES, as I've read and adored each of these books. (Obviously, I also personally recommend TWELVE STEPS.) Most of the other books in these bundles have been on my personal "to read" list for a while. I'm already jealous of the lucky winners!! (I can't wait to read Lizzy Charles' newest book: BRING THE RAIN, and I've adored everything I've read so far from Cassie Mae.)

Update!! I got to read an advance copy of BRING THE RAIN, and it was amazing! My review is on Goodreads here.

(Note: Rafflecopter is a little quirky, and it kind of looks like this form is only for the YA bundle ... but if you click the little arrow under the prize information, you'll see that it's also an entry form for the NA/Adult prize package.)
Posted by Veronica Bartles at 8:01 AM 1 comment:

As I'm sure you've noticed by now, I hate wasting kitchen space with single use appliances. So when I get a new toy for my kitchen, I have to come up with at least five new ways to use it (other than its intended use). And since my amazing friend Brenda gave me an electric cake pops maker for Christmas, I've been busily coming up with new and fun ways to use it. Today, I perfected the process for making delicious cheese filled tater tots in my cake pops maker. 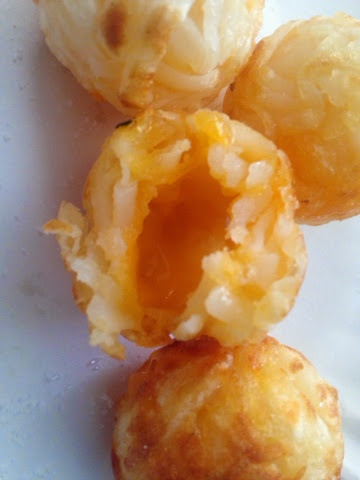 You will need:
1 pound shredded potatoes
24 quarter inch cubes of cheese (any variety - you can even use vegan cheese, if you want to make these vegan-friendly!)
Nonstick cooking spray
Salt
Electric cake pops maker

In a large bowl, sprinkle a little bit of salt (and any other seasonings you desire)* onto the shredded potatoes. Microwave on high for 3 to 4 minutes, until potato shreds just start to stick together. Stir.

Take a pinch of the partially cooked potato shreds in your hand. 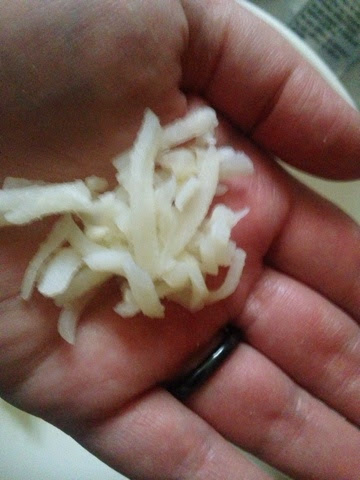 Place cheese in the center. 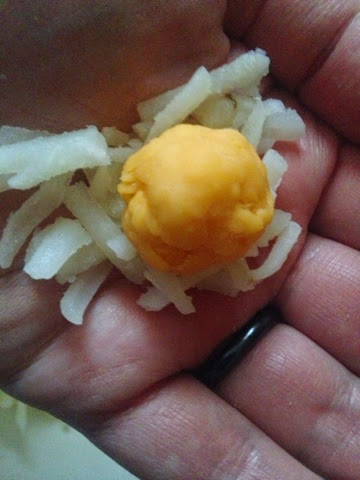 Press potatoes around the cheese and form into a tight ball, approximately the size of the holes in your cake pops maker. You want the balls to be big enough that they will come into contact with all of the cooking surfaces when the appliance is closed, but not so big that it's difficult to close the lid. 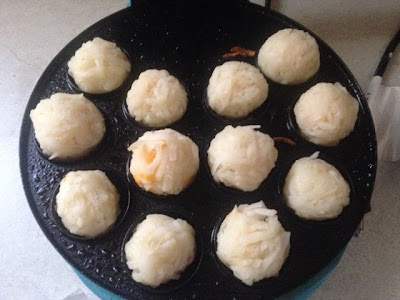 Place potato balls in preheated cake pops maker that is been sprayed with nonstick cooking spray. Close and let bake for 8 to 10 minutes. 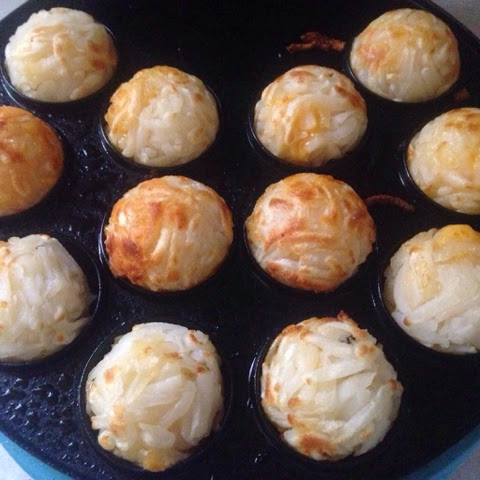 Let sit for an additional minute before removing from the cake pops maker. Serve warm.

*note: It is important to season the potatoes before forming into tater tots. The crust on the outside of the tots will keep the seasoning sprinkled on at the end from penetrating to the middle, giving you bland and flavorless tots.

Variation: omit the cheese entirely for simple, giant tater tots with essentially zero fat. (Without the cheese, these tots can fit vegan diets as well.)

This was my third attempt at making the tater tots in my cake pop maker. The first time, I tried doing it with raw shredded potatoes. They were delicious, but didn't hold together in tater tot form. Next, I tried cooking the potatoes before shredding them. They held the shape well but the texture was off. (More like crispy mashed potato balls.) It appears that the secret is shredding the potatoes first and then partially cooking them for maximum effect.
Posted by Veronica Bartles at 4:44 PM 3 comments:

It's the one day a year that we actually watch the commercials on TV, and everyone has loads of epic snacks to munch on. And I think, in between commercials, there's some kind of sports event going on in the background. ;)

So what snacks are you making this year? If you need some inspiration for quick and easy treats, here are a few of the things I'm making this year: Simple Stuffed Mushroom Caps, Mock Tempura Veggies, and Sweet & Sour Meatballs. The mock tempura veggies are vegetarian, though not vegan, and the meatballs and stuffed mushrooms will satisfy your carnivores! (You could easily make the mushrooms vegetarian by omitting the salami.) 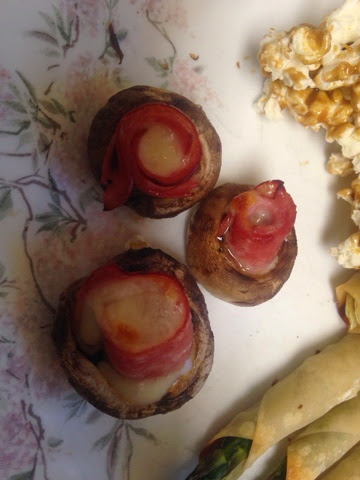 You will need:
mushrooms (as many as you want to make)
mozzarella or cheddar cheese (cut into 1/4-inch blocks - 1 per mushroom)
very thinly-sliced salami

Wash mushrooms and pull stems out of caps (set stems aside for later use). Cut a slice of salami in thirds and wrap one salami strip around a block of cheese. Place the salami-wrapped cheese into a mushroom cap. Bake at 425 degrees Fahrenheit for 6-8 minutes, until cheese is melted and mushrooms are slightly soft. 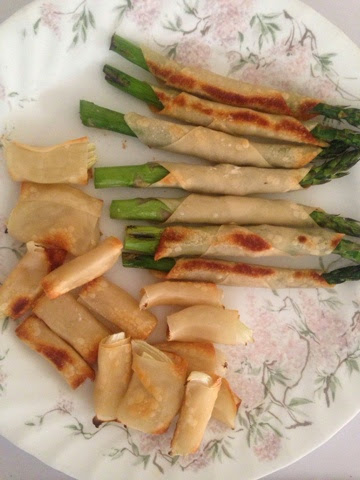 Spray a cookie sheet with non-stick cooking spray and preheat oven to 425 degrees Fahrenheit. Cut onions into wedges and pull apart the layers. Cut baby carrots in half, lengthwise (unless they're very thin carrots). Wrap each veggie piece with a wonton skin, sealing with a bit of water. (You'll probably use a full wonton skin for each of the asparagus spears, but you'll want to cut the wonton skins in half for the mushroom stems and baby carrots. The onion pieces may need a full or half wonton wrapper, depending on how big the onions are.) Place wrapped vegetables on cookie sheet, spray with a thin coat of non-stick cooking spray, and bake for 8-10 minutes, until wonton skins are golden brown and crisp. (Depending on your oven and how many veggies you cook at once, you may need to bake them for up to 15 minutes.) 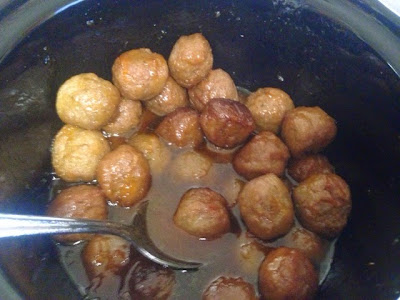 Place meatballs into your crock pot and stir in full jar of apricot preserves. Cook for 1.5-3 hours on high or 4-5 hours on low. Serve.

*Optional variation: You can use grape jelly or orange marmalade instead of apricot preserves, for a slightly different sweet-and-sour flavor.
Posted by Veronica Bartles at 10:26 AM No comments: