A week ago, Peter Senftleben lamented on Twitter that he was trying to eat healthier, but a diet composed of mostly vegetables was a diet lacking in flavor. Of course, I had to jump in to assure him that many of my veggie-centric meals were not only delicious, but they were actually favorites for my carnivorous family. He didn't believe me, so I posted a picture of our dinner that night: Spaghetti Squash with a sauce of tomatoes, mushrooms and red bell peppers. (Bonus! This recipe is not only vegetarian, it's vegan friendly and gluten-free. And according to the recipe builder function on the fitness app on my phone, a giant serving of this dish comes in at less than 300 calories!) As promised, I'm sharing this recipe here today. 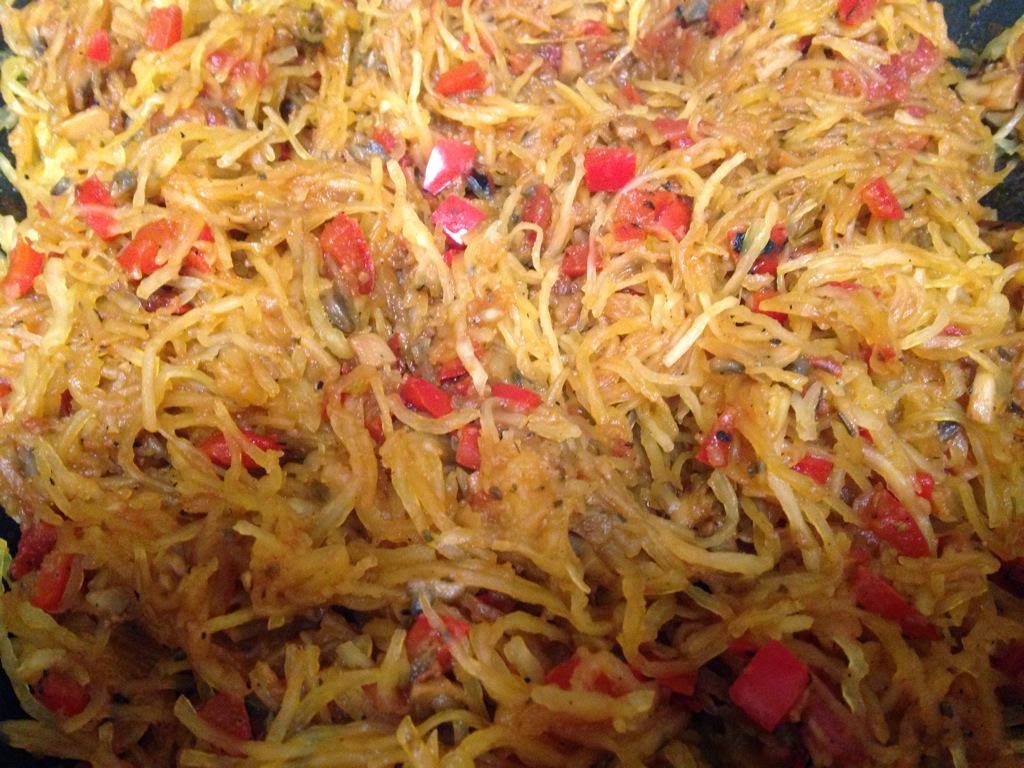 Cut spaghetti squash in half, lengthwise, and scoop out seeds. Place, cut side down, on a plate with a half-inch or so of water on it, and microwave on high for approximately 12-15 minutes. Set aside to cool.

Meanwhile, in a large wok, heat up 1-2 tablespoons of olive oil. Add garlic. Sautee mushrooms in the garlic-infused oil. Add peppers and continue to cook until peppers are slightly soft (but not mushy!) (If vegetables begin to stick, you can drizzle in a bit more olive oil. Don't overdo it, though, or your healthy dinner won't be nearly as healthy!

Remove flesh from cooked squash (it will separate into strands resembling spaghetti noodles), and stir into the mushroom/pepper mixture. Sprinkle with Italian seasoning. Stir in one can of diced tomatoes (including the liquid) and continue to cook until it's all warmed through.

Serve. (We were super-hungry, so I divided the entire dish into five ginormous servings ... and at less than 300 calories, I didn't even have to feel guilty about the massive portion size. But for a normal dinner, this can easily make 8-10 servings.)

You can sprinkle with parmesan cheese, if desired (which would make it no longer a vegan meal), but it's delicious as-is.
Posted by Veronica Bartles at 1:46 PM No comments: