Day 10 (Bug Boy) was really fun to watch Phil draw. He started by asking our youngest daughter for a shape, and she told him to draw something with a peace symbol. This became a face in a mask, and when our next-to-youngest daughter asked "are you drawing a bug boy?" the character fully came to life. 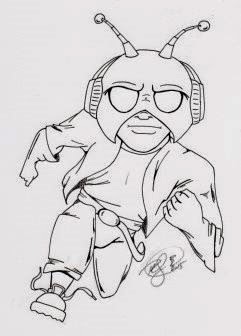 George strapped on his power belt and his cape. The evil Exterminator was up to his old tricks again, and it was up to Bug Boy to save the day once more! He slipped his mask on and tiptoed to the door.

"And where do you think you're going, young man?" A stern voice echoed through the hall.

George gulped and turned to see Major Mom standing in the doorway, arms folded and a frown pulling at the corners of her mouth.

"Never fear!" he announced in his bravest Bug Boy voice. "I will save the world from The Exterminator's evil schemes!"

"Not without a jacket," the Major said. "It's chilly outside, and you're just getting over a cold."

The major shook her head. "No capes! It could get caught on something. Wear a jacket, or you can choose to play inside."

Bug Boy pulled on his exoskeleton armor and flame-proof gloves. His sources told him The Exterminator had a new, secret lair in the wilds beyond the back yard fence, but Bug Boy wasn't afraid. He would vanquish his foe, restore peace to the planet, and be back home by suppertime.
Posted by Veronica Bartles at 12:46 PM