To celebrate our anniversary, my amazing artist husband, Phil, decided that he would do a 19-day art challenge, drawing one new picture every day for 19 days. And I thought it sounded like fun, so I jumped right on the band wagon and declared that I would write a silly, one-page story to go with each picture he creates during this challenge. Of course, I have to wait for him to finish each day's picture before I can write the story, so I should be one day behind him ... but I'm also really flighty, so I'm a few more days behind than that. (Today, I'm playing catch-up! - Eventually, all of the pictures & my stories will be posted on my website, but for now, here's the story I wrote to accompany yesterday's drawing.)

Phil is taking suggestions for his art challenge, and yesterday (day 7) was inspired by the suggestion to draw "fairy tales as told by goldfish." 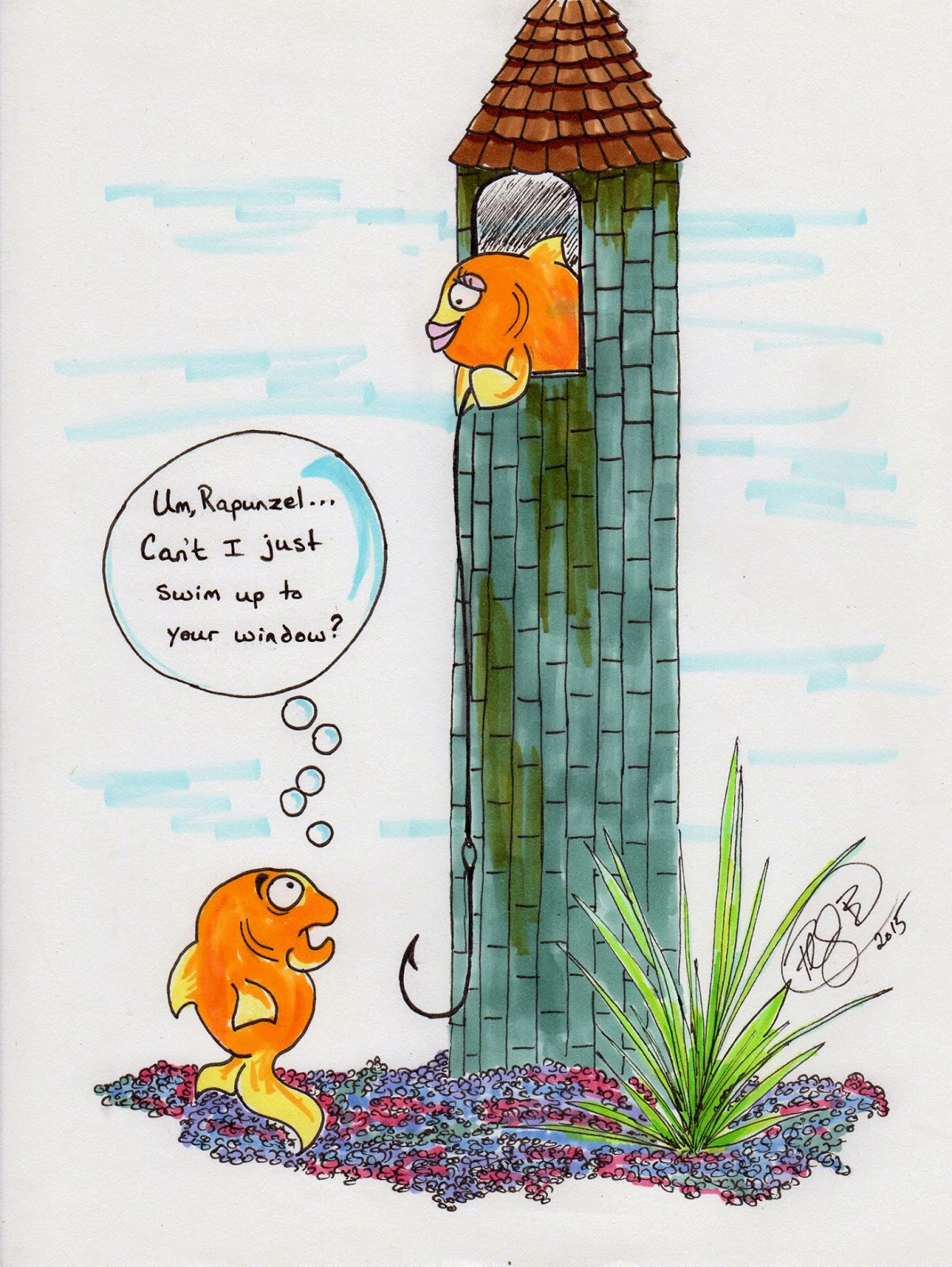 Once upon a time, a goldfish princess named Goldipunzel lived in the top of a tall tower with no doors. The princess was kind and beautiful, but she was terribly lonely. Her only visitor each day was the old hermit crab witch who had imprisoned her in the tower when she was only a guppy.
Every day, the old crab would come to the base of the tower and call “Goldipunzel, Goldipunzel, let down your hair!”
The princess would shake her head and sigh. “Goldfish don’t have hair, mother.” Then, she would lower a fishing line and hook out the window and pull the witch up to visit her.
One day, a handsome goldfish prince swimming through the seaweed forest heard Goldipunzel singing. He stopped at the base of the tower and gazed up at her, mesmerized by her beauty. Before long, Goldipunzel realized that she had an audience and stopped her song.
“Hello,” she called. “Are you here to visit me? I’m terribly lonely here in my high tower, and I welcome your company, sir.”
She lowered the hook to pull the prince up to her window.
“You’re kidding, right?” the prince asked, swimming to the top of the tower. “You realize that you can swim away whenever you wish, don’t you?”
Goldpunzel blushed and shyly reached out to take the prince’s fin. And they swam off to his castle together to live happily ever after.

Posted by Veronica Bartles at 3:35 PM