The agent round of Pitch Wars is almost upon us, and I can't wait to introduce the fabulous Team Magic manuscripts to the world! These fabulous folks can really write, and I've been blown away by both the quality of their work, and the level of commitment my fabulous Team Magic people have put into polishing up their manuscripts over the past several weeks. But it's not time to reveal their pitches yet. You'll have to wait a few more days for the magic. In the meantime, I'd like to introduce you to the amazing members of Team Magic. 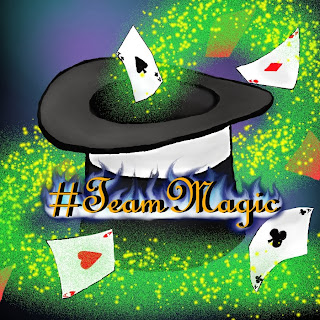 Today, I'd like to introduce you to alternate #1: Khyl Shumway.


Khyl's Pitch Wars query letter announced that he was submitting his manuscript to me simply because he had a "gut feeling," and "I've got a strong gut."  It was a risky move, because it came off as more than a little bit cocky, but I'd spent the last several days advising Pitch Wars hopefuls on Twitter that they should approach Pitch Wars with confidence, even if they were secretly terrified. I'd invited everyone to join the #EgoClub - picking out all of the positive things the mentors would say in the upcoming weeks and telling themselves "that's a love letter to me." Khyl's super-confident query letter made me smile, and even though the pitch was a little lackluster, his confidence was enough to make me want to read further.

Khyl's first line made me literally laugh out loud, and I could tell right away that he had a great middle grade voice, but I'll admit I wasn't 100% sold at first. He was a top contender, sure, but I had so many great entries in my submissions pile that I couldn't be certain. So I requested the first three chapters. And I giggled my way through it all. He alternates between two voices: the angel on one shoulder and the devil on the other. And I was so impressed by the way each voice was clear and distinct. I could tell which character was speaking without even looking at the chapter header, which is exactly what you want in a story told from multiple POVs.

I read my top 3 alternate choices aloud to my kiddos (ages 15, 13, 11 and 9). RIDING ON SHOULDERS made all four of them laugh. And when I finished reading, they begged me to make this one of my picks, because they wanted to read the rest of the story. So I did. :)

What inspired you to write this novel?

One time I was in a plane crash. Since then, I’ve had a lot of people tell me that I “need” to write a book. I took a crack at writing that story, but in the end it was too traumatic for me to type out in that kind of detail. One day… Anyway, I feel bad that those people will not be getting the book they were expecting; fiction has worked much better for me. I LOVE to write. I think it’s the coolest thing ever—and what all those people said about me WAS true. I did NEED to write a book.
As far as this novel goes, I think that character choices have the ability to drive a story really well. I’ve always been intrigued with the idea of angels and devils on our shoulders, tempting us… helping us… I wanted to give life to those characters, and at the same time bring choice and decisions and consequences to life, too. Hopefully this story does some of that.

Why did you want to go through the torture be a contestant in Pitch Wars?

As much as I love querying (honestly, I think it’s cool—don’t hate!), I was intrigued with a creative way to get my writing considered by agents. If those agents were willing to take a look at my stuff in a different setting, then I wanted it highlighted there, too.
The second reason was the mentor aspect of this. My favorite part of the writing industry is the love that is passed around in the form of helping other writers to become better. You really can’t find another industry that compares in terms of helping others become successful—for free, too! It’s amazing. (Thanks, Veronica!)

I’ve been a long-time fan of the Wheel of Time series. So I’d have to say A Memory of Light, which was the 14th book in that series.
I also loved The False Prince. So much.

What are the top 3 songs on your manuscript play list?

I don’t listen to music when I write.
When not writing, I’ve recently been listening to the Imagine Dragons album, mostly. And JT.

We’re all about magic and positive thinking here on Team Magic. Tell us about your most magical experience of 2013 (other than being picked for Pitch Wars, of course).

Completing the first draft of Riding on Shoulders, definitely. The feeling of closing that laptop and still having thoughts of “this is going to be awesome,” can’t be beat. Even knowing how much editing I had in front of me, I was whistling and skipping around the house for a full 24 hours. (Okay, maybe it was more like 48 hours.)


I totally relate to that! There's no better feeling than finishing a new first draft, knowing that there's a lot of work ahead to make it perfect, but that there's a whole story there, waiting for the magic of revision to bring it to life. Thanks, Khyl!
Posted by Veronica Bartles at 9:33 AM