Giant News! or How My Book Became a BOOK! (The Long Version)

My super-talented, amazing, artist-hubby, Phil, drew this beautiful picture to celebrate the announcement of my debut novel, TWELVE STEPS, coming in 2014 from Swoon Romance. This is my main character, Andi. Isn't she amazing? 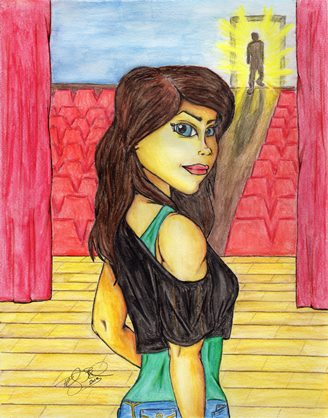 You may have already seen my book announcement here. That's the short-and-sweet version of the story. But if you've ever met me (or read my blog), you know that short-and-sweet isn't really my thing. Because the real fun of a story is in the details. If you're more of a "just the facts, ma'am" kind of person, my original announcement is the one for you. But if you're more like me, then keep reading. ;)


Taking the Next Step: Swooning Over a Story

Once upon a time, there was a little girl who loved to write stories. And she told everyone she knew that she was going to become a famous author someday. And everyone she knew told her that she was sure to become one of the best. She began collecting beautiful pencils and told all of her friends and family that she wouldn't sharpen any of them until she was ready to write her very first published book. Because these pencils were full of magical stories, just waiting for her to unlock them.

But that little girl grew up, and suddenly, "someday" seemed to be coming too soon. The little girl began to worry. What if she tried and failed? What if the one thing she'd always known she was good at wasn't really enough? What if people laughed? She packed away her beautiful pencils and put her dreams on hold, because as long as she hadn't yet begun, "someday" was still a safe dream.

Then, in October of 2008, this grown-up girl (who now had 4 adorable children of her own) went to a women's conference where she met NYT best-selling author, Jason Wright. And as she listened to him speak, and then later chatted with him for a bit, she realized something earth-shattering. He was a super-successful author, and he was just a normal person!! She left the conference with one thought resonating in her mind: "If he can be a bestselling author, then so can I!"

The girl sharpened her first story pencil and pulled out a brand-new spiral notebook, and started writing the book she hoped would be her very first published novel.

Less than a month later, the first draft of that first novel was written. And it was pretty awful. So she revised and edited and showed it to some friends who told her that it was still pretty awful. (Thanks, Shawn, for forcing me to find my voice!) And after she finished crying, she revised again, until she was convinced that it was perfect. She printed off the manuscript and sent it to 9 agents and a publisher, knowing that the first batch of queries would probably bring several rejections. And she was right. Because the story really wasn't ready yet. But out of the ten queries she sent, one of the rejections was a semi-encouraging letter that appeared to be just half a step above the standard form letter, and the girl was thrilled to see the encouragement.

The novel wasn't quite there yet, she realized. So she put it away for a while and wrote something new. And then she wrote something else. But she didn't know how to make any of her stories "good enough." She couldn't do it alone.

The girl joined SCBWI (the Society of Children's Book Writers and Illustrators) and MWA (Maryland Writers' Association). She met some other writers who helped her polish and revise her first manuscript until it no longer resembled the original. She attended writing conferences, where she met even more professional authors, and rubbed elbows with some pretty fabulous agents and editors. And then she sent out more queries. And she entered a few contests.

There were a few requests and some very highly-encouraging rejections, but no offers. And in the fall of 2012, after revising and querying for two years (but a total of only 21 queries - an average of less than one query per month), the girl decided it was time to move on to different projects. Her beloved critique partners tried to tell her that 21 queries was not enough, and she shouldn't give up on this story they loved, but the girl would not be swayed. After all, she had several manuscripts waiting to be revised. Surely, one of them would be the key to her dreams.

Yet, the girl wasn't ready to say goodbye to the characters she'd grown to love so much. And so she decided to take a break from the heartache of writing to try to get published. She set aside the month of November (or, as it is known in the writing world, NaNoWriMo) to write something that would be just for her. Something silly and fun that she didn't have to worry about trying to publish. She wrote the story of the little sister from her first manuscript, fully intending to file it away with the now-abandoned first manuscript as soon as November was over.

But when December rolled around, the girl realized that she might have created something worthwhile. And so she sent it to her critique partners, who loved it even more than her first manuscript. And they made her promise not to give up so easily this time around. "When you have 200 rejections, you can quit."

So the girl entered a contest. And then she entered another one. And she received several requests. She sent the manuscript to the agents who had requested to see it, and she waited. And slowly, the rejections trickled in. But she hadn't hit the magic number yet, so she couldn't quit. She took the advice of an amazing super-agent and revised the manuscript, pulling out an entire subplot and tightening everything.

She entered another contest, and she received several more requests. And then, some friends talked her into entering one more contest, in which she received two requests.

The girl sent the requested pages to everyone who had asked, and she waited. When a few weeks went by with no response, the girl decided to hurry the process along. If she wasn't allowed to give up on this manuscript until she had 200 rejections, she had to get to work. She compiled her list of top agents and started writing query letters, sending fifteen in one week, before she lost her nerve.

And then, one day, the girl came home from a date with her amazing husband and found an email waiting for her. Awesome Editor said she wanted to buy the girl's book.

And the girl did not sleep that night. She was too busy dancing and squealing with excitement.

After contacting everyone who was still considering the manuscript, the girl waited the required week to see what would happen next.

And another Amazing Editor said she also wanted to buy the book.

And then two agents said that they would like to talk to the girl, so phone calls were scheduled.

The first agent was one the girl had dreamed about for years. Dream Agent had even given the girl the idea for one of her other stories, when they met at a conference. The girl was certain that this was destiny. She dreamed of rainbows and bubbles and a giant Happily Ever After of Publishing Bliss. But although the conversation was pleasant, and Dream Agent was very knowledgeable in all aspects of the publishing business, the "spark" just wasn't there. And so Dream Agent and the girl decided that a partnership wasn't meant to be.

The second agent was one that the girl had never even heard of before Super Agent* requested her manuscript in a pitch contest. And so the girl came into the conversation warily, with no preconceived expectations. Super Agent  totally blew the girl away with her professionalism and enthusiasm. After a ten minute phone call, the girl would have signed a contract with Super Agent in a heartbeat. But Super Agent proved her total and complete awesomeness by advising the girl to negotiate this publishing deal without an agent, because most of the work was already done, and Super Agent said she wouldn't feel right taking commission on a deal she hadn't brokered. Super Agent told the girl that she should wait to find an agent until her NEXT manuscript was ready to query. Then, Super Agent took time out of her busy schedule to help the girl understand the totally-overwhelming, tiny details of the offers she had received, so the girl could make the best choice possible.

And two days later, the girl accepted the offer of publication from Swoon Romance! Her book is scheduled to be published in 2014, and she's ready for the hard work that will bring her to the next Happily Ever After.

*Super Agent, I hope you read this, and that you know who you are. You will forever have my gratitude! You totally rock!!!
Posted by Veronica Bartles at 1:51 AM