Pitch Wars: You Might Have Been Closer Than You Think 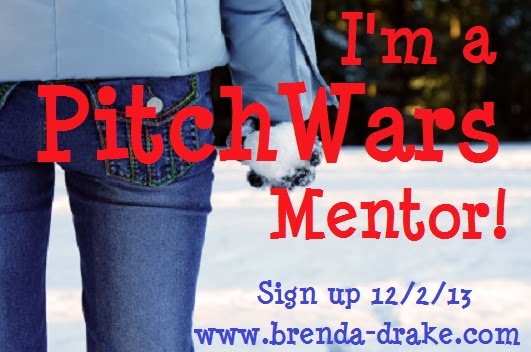 As you know, I'm one of the lucky authors participating as a mentor in Pitch Wars this year. In December, hundreds of hopeful entrants sent their carefully-constructed queries, along with the first five pages of their manuscripts, to their favorite mentors. And we spent days reading through the entries over and over again, discussing our favorites behind the scenes and trying to narrow down the list of fabulous entries to ONE (well, three actually - we did get to pick two alternates).

I've always had a ton of respect for the difficult job agents and editors face, but selecting my Pitch Wars team showed me how totally awesome these people really are.
Wading through a sea of fabulous to find the one gem that sparkles the brightest is tough. And as much as I wanted to, I simply didn't have time to offer mentor assistance to everyone. I had to say no to most of the authors that applied to me. And I cried and worried and fretted with each manuscript I crossed off my list.

I can't speak for the other mentors (frankly, I was too afraid to go snooping into other mentors' inboxes - I had so many amazing manuscripts to consider that I didn't want to run the risk of falling in love with ANOTHER ms and making my decision even more difficult!), but every single entry I received had merit. You guys did your research. You sent me manuscripts that fit my interests, and it was pretty obvious that many of you paid attention to more than just the mentor bio and wish list I had posted. And man, you guys have talent! I was impressed by each of you. Of those who applied to me, every single one was a talented writer, who I expect to see achieve great things. But I could only pick one mentee and two alternates. I had to narrow it down.

There were several entries that I liked, but that other mentors were totally gushing over behind the scenes. Everyone should have a mentor (and later, an agent and an editor) that loves your manuscript so much they can't stop talking about it. If I knew another mentor was that special someone for this particular manuscript, I stepped aside. (Those were the easy choices.)

In the end, it all boiled down to these questions:
* Do I love the story? Do the characters feel real? Do I want to know them better?
* Is this story something that the Pitch Wars agents are looking for?
and most importantly:
* Will I be able to help this writer polish his/her manuscript to a brilliant shine?

There were entries where, though the writing was beautiful and the characters were well-developed (and everyone else was raving about how much they loved the story), I just wasn't connecting on a personal level. You know how they always say a bad agent is worse than no agent at all? (Note: a "bad" agent doesn't necessarily mean the agent is disreputable or inexperienced. But if the agent doesn't share your vision for your story, they probably aren't the best choice for you personally.) The same thing applies to mentors. You wouldn't want just anyone guiding you through revisions. If they aren't bouncing-off-the-walls excited over your manuscript, or if they have that vague "I like it, but I think you should change the aliens to cyborgs and the puppies to dinosaurs" feeling about your work, you're probably not going to be happy with the changes they suggest for you... and you'll both end up feeling frustrated.

So when I found myself thinking, "This person has real talent, and I'd love this story if only..." I knew I wasn't the right mentor.

And when I'd narrowed it down... I still had TWELVE manuscripts on my "strong maybe" list. TWELVE writers I desperately wanted to say "yes" to. And only THREE slots to fill. I said "no" to some amazingly-talented writers. It was an agonizing choice, but it finally boiled down to the three entries that I simply couldn't stop thinking about. Over the next few days, as we prepare for the Pitch Wars agent round, I'll be introducing the fabulous members of Team Magic to you.

And for those of you who entered but didn't make it into Pitch Wars this time around, I encourage you to keep trying. Keep writing. You are a talented bunch!

Posted by Veronica Bartles at 10:30 AM