As a member of The Church of Jesus Christ of Latter Day Saints (the Mormon church), family is super important to me. The genealogy (family history) program coordinated by the church is awe-inspiring. The Family History Library in Salt Lake City contains thousands of records, many of which have been made available for free public use online (and any that haven't yet been digitized are still available for the public use, for anyone willing to travel). And a worldwide volunteer force works around the clock to catalog and index new records, so that more and more information is available for family history research every day.

We believe that it's important to know who we are and where we came from, because we believe that family is not just a "here on earth" luxury. We believe that families can be sealed together for all eternity. That our spirits live on when our bodies die, and that we can be together with those we love far beyond this life on Earth.

And the more I get to know my own family through family history research, the more I love and wish I could know them personally.

When Rachel Harris issued a challenge to her Flirt Squad this week to blog about where we would go if Reyna sent us on a journey through time, I immediately thought of my family. Like Cat in MY SUPER SWEET SIXTEENTH CENTURY, I would like to visit some of my family in the past. I'd love to get a sense of how they really lived and have the opportunity to form fast friendships, like Cat did. (Although it would still be super cool to have one of my ancestors visit me, like Less in A TALE OF TWO CENTURIES, I'd rather get a sense of the history by traveling back in time to meet them.) 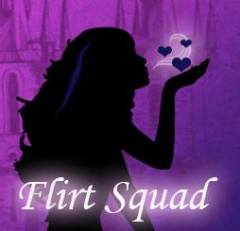 The question is: if I had to choose only one, which ancestor would I want to visit?﻿
﻿
I would love to take a trip back to England in the year 1173, to meet Eleanor of Aquitaine. I'm fascinated by this amazingly-strong woman who divorced her first husband and then was imprisoned for convincing her son, John Lackland (the Prince John from the Robin Hood stories) to try to overthrow his father, her second husband Henry II.

I want to know the real woman behind this story of a woman who had so much power and influence at a time when women were supposed to be completely powerless. And I'd really like to get to know John. I'd love to understand why he, as his father's favorite and the one likely to inherit everything, he was willing to throw it all away for his mother's favor. (Incidentally, I always laugh like crazy at the Disney animated version of Prince John, who moans "Mother always did like Richard best." - Because as far as I can tell, sibling rivalry... trying to get his mother's approval... was the sole reason John was willing to throw away everything he had and risk being disinherited. Disney appears to have been spot-on in their portrayal!)

But I'd also love to take a trip to a more recent era. I want to ride the rails with my grandpa during the Great Depression. I want to witness his adventures and get to really know the grandfather I always idolized. I'd love to be there when he tried to save some walking time by jumping out of a moving train into a beautiful lake (he hit the lake so hard that he skipped across like a giant stone and woke up in the hospital days later). I want to taste the long strips of "bacon" that he said were the most delicious he'd ever tasted (although he couldn't eat any more when he discovered that he was eating smoked rattlesnake). And I'd love to be there to see the look on the face of the down-on-his luck man that Grandpa gave a car to, when he won it in a raffle.

There are many holes in my family tree. Places where the records aren't available to fill in the gaps, ancestors I haven't yet found. And I'd love to bounce my way through history to find these people. I want to learn their stories.

I could never pick just one.

I'm so grateful for the advances in technology that allow me to travel around the world at the speed of the Internet, discovering documents and photographs that allow me a small peek into the lives of these distant (and not-so-distant) family members.
Posted by Veronica Bartles at 8:51 AM