It's getting to be summer time here in New Mexico, and I don't like turning on the oven (& heating up the house) any more than absolutely necessary, so I try to come up with alternatives for our favorite baked goods when warm weather hits. But sometimes, only the real thing will do, so when my daughter asked for Cinnamon Rolls for breakfast today, I thought I'd experiment a bit to see if I could bake them in my crock pot instead. (The answer is yes, I could!)
(If desired, you can finish these Cinnamon Rolls with your favorite glaze or cream cheese frosting, but I prefer my rolls unfrosted, because I don't care for massive amounts of sugar in the morning.) 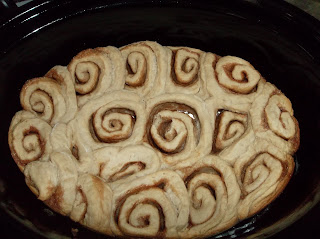 First, I made a batch of my super-delicious and easy Cinnamon Roll Dough and divided it in half.
A scale makes it easy to divide dough exactly in half, but you can eyeball it if you don't have a scale. (Each half batch of dough weighed about 1 lb. 14 oz.) - You can also cut the ingredients for the recipe in half, if you're only making one batch of cinnamon rolls. 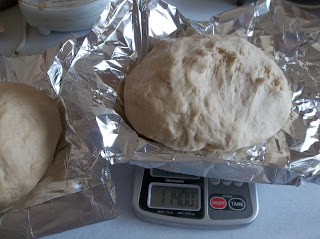 For one batch of Crock Pot Cinnamon Rolls, you will need:
1/2 batch Cinnamon Roll Dough
2 Tbsp. butter, softened (for vegan diets, use margarine instead)
1/4 c. sugar
1 tsp. cinnamon
(optional): raisins, nuts, chocolate chips, craisins... whatever you like in your cinnamon rolls! 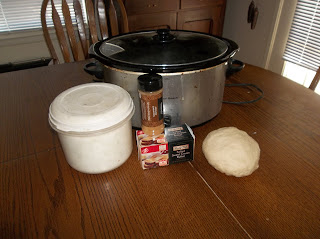 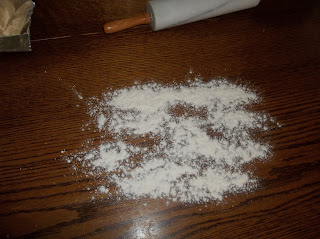 Roll the dough ball in the flour to coat. 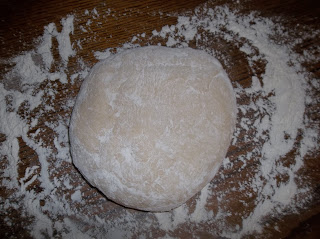 Roll out the dough into a large oval, about 1 cm thick. 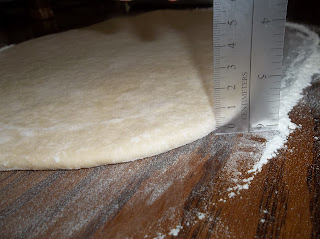 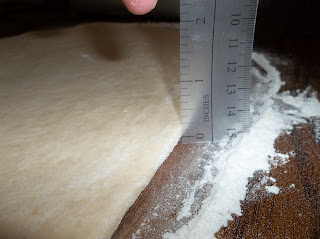 If you keep your butter in the fridge, like I do, you'll want to soften it slightly. Microwave on high (in a GLASS bowl or cup - plastic will melt) for 5-15 seconds.
You don't want to let it melt, just soften it until it spreads easily. 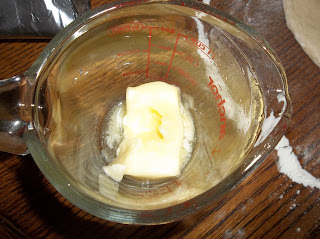 Spread butter on the dough. (For a lower-fat version, simply spray with a thin layer of non-stick cooking spray instead of spreading butter or margarine.) 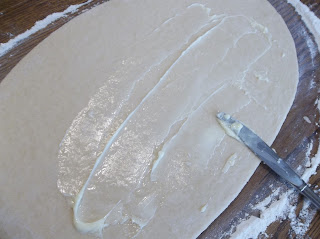 In a small bowl, mix cinnamon and sugar together. 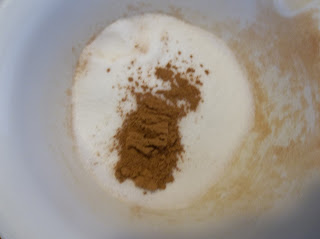 Sprinkle over dough, leaving about 1/2 inch on one long edge free of sugar. 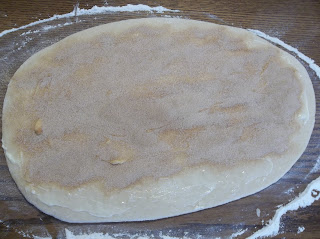 If desired, sprinkle with a handful or two of raisins (or your favorite fillings). 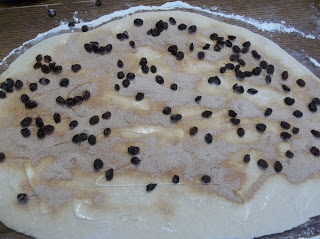 Roll into a long cylinder, starting on edge opposite the unsugared edge. 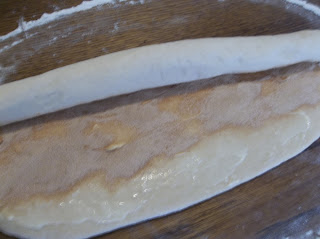 Press slightly to seal dough together. Place, seam-side down on cutting surface. 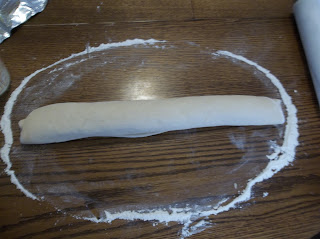 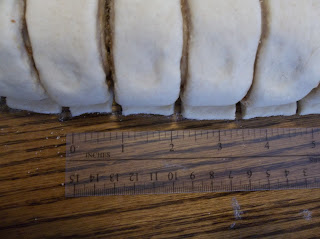 To prepare your crock pot for baking, roll a long piece of foil into a snake, and coil loosely in the bottom of your Crock Pot, shaping it to fill the space as fully as possible. Remove from crock. 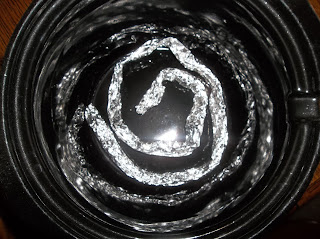 Cut another piece of foil, slightly larger than your Crock Pot. Place the foil sheet over the top of Crock Pot, and place foil spiral on top of it. 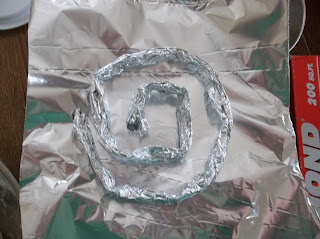 Press down into the crock pot, to fill the bottom of the crock. 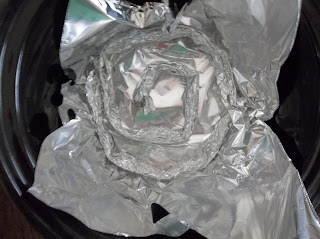 Fold edges in, around the spiral. 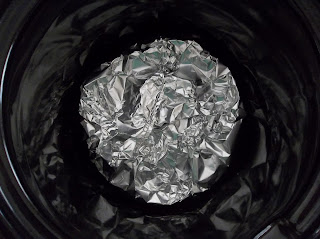 Flip foil disc over, so smooth side is facing up. 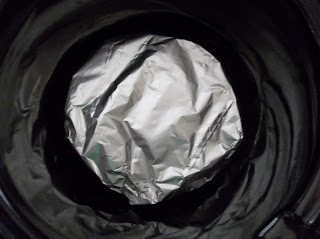 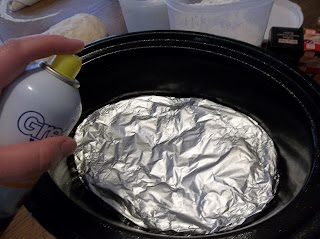 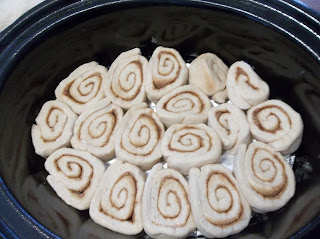 Cook on High for about 2 or 2 1/2 hours.
Make sure to keep lid of Crock Pot slightly askew, so steam can escape, or you'll have a sticky, doughy mess when you're done. 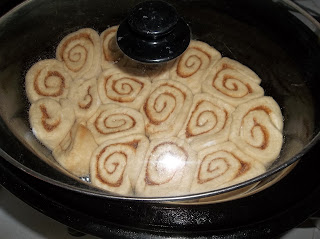 Because the Crock Pot heats more slowly and gently than the oven, you don't need to let the rolls rise before turning on the Crock Pot. Simply put them in and turn it on. They plump up beautifully! 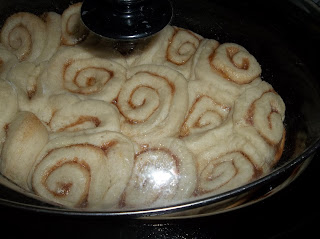 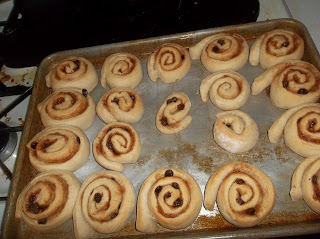 For comparison, this time, I made a second batch of rolls with the other half of the dough, baked in the oven (on a greased cookie sheet at 350 degrees Fahrenheit for about 20 minutes). The texture of the finished rolls was nearly identical... although I did get distracted right at the end of the cooking time for the Crock Pot batch and forgot to turn it off. I ended up with slightly burnt edges on the Crock Pot Cinnamon Rolls, but they were still delicious! I'll definitely make these again!

Update: A word of caution!! Make sure to take the cinnamon rolls OUT of the Crock Pot as soon as they are finished baking. For the cakes I've made, I've generally turned off the Crock Pot and let the cake cool in the crock before removing it, but because the cinnamon rolls are bread-based, they have less moisture than a cake to begin with. After baking my first batch, I left them in the Crock Pot to keep warm until my husband came home from work. And by the time he came home, about an hour and a half later, the rolls had dried out considerably. They were still tasty, but they were no longer fluffy and soft, as cinnamon rolls should be. It's and easily-solved problem. Simply remove the rolls to cool on a wire rack, or serve immediately while warm.

Of course, if you forget and leave the rolls in the Crock Pot until they're all dried out, like I did with half of the batch, all is not lost. Simply use them to make French Toast Casserole! It was so good!! :)

Posted by Veronica Bartles at 5:09 PM