Why a Writing Contest Failure was the Best Thing Ever 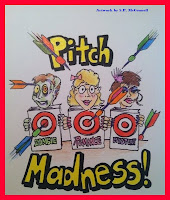 This Friday, the submission window opens for Pitch Madness, an amazing contest on Brenda Drake's blog, where writers get the chance to showcase their best pitches, and agents compete to win the chance to request pages from the manuscripts pitched.

Those of you who have been following my blog for a while will remember that I entered Pitch Madness last March as well... and I didn't get in. I made it into the slush round, but wasn't picked to be one of the actual showcased authors for the agent round. And I was kind of devastated, because I had put so much hope behind this opportunity. Several of the agents participating were on my dream list, and I just KNEW that if they saw my pitch, they would fight to the death for a chance to read my manuscript.

But I didn't even get a chance to play the game! (Sob!)

A day or two after the selections for Pitch Madness were posted, I saw another frustrated author post on twitter: "The worst part about not making it in is that I don't even know why." I responded to her tweet, completely agreeing with the frustration and wishing that I could also know why I wasn't selected. But I understood that, with the number of entries received in a contest like this, it was totally unrealistic to expect feedback from the judges on the entries that didn't make it. And I pulled out my virtual pom-poms to cheer for those who did make it into the contest, so I wouldn't fall into the trap of heartbreak and bitterness.

Imagine my surprise when contest coordinator extraordinaire, Brenda Drake, sent me a private message (she had seen my tweet) to let me know that my entry had been very close. Half of the judges loved it, the other half did not... so it didn't make it past the slush. She explained the problems that the judges had seen in my submission and offered me a few tips for the revisions. Then, she encouraged me to enter the Writer's Voice contest that she had coming up in May.

I revised, got feedback, revised again, reworked my pitch multiple times and got my entry all beautiful and shiny.

And I chatted with Brenda and the other judges for the upcoming contest on Twitter almost daily.

My manuscript was better than it had ever been. My pitch was nearly-perfect. And several of the judges expressed interest in my story even before the submission windows opened, playfully teasing each other back and forth on twitter over who would get to pick me for her team.

It was a sure thing.
﻿﻿﻿﻿﻿﻿﻿﻿﻿﻿﻿﻿
When the Writer's Voice competition rolled around, I proudly posted my entry on my blog and waited for the fighting over me to commence.

Sure, I got  lots of comments and encouragement from my friends, the other contestants, and a few people who wandered across my blog... but nothing from the judges.

And of course, I cried. I sobbed. I bawled. I threw a couple of mini tantrums (in the privacy of my own bedroom, of course). These judges were my FRIENDS!! They had ENCOURAGED me! They said I was a good writer!! So why wouldn't they pick me?? Maybe they weren't really my friends at all. Maybe they were just big old meanies who had only built up my hopes in order to crush me and laugh at me in public. That was the only possible explanation, right??

As I wallowed in a pool of self-pity and woe-is-me-isms, Brenda sent me another private message. "I really wish I could have picked you. I think you have talent, but your manuscript still isn't ready. You didn't really do anything about those issues I mentioned the last time, and they're still holding you back."

She offered to work with me, once the contest was over, and so I sent her my manuscript, which she promptly ripped to shreds. And I cried again. (Are you noticing a pattern here??) I turned off my computer and told my family that I was done being a writer. Obviously, I didn't know what I was doing, and I could revise this thing forever, and it would never be good enough, and I should just give up on that silly, old writing dream.

Then, I fired up the computer again and took another look. And of course she was 100% right.

This time around, I made it to the agent round of a couple of contests, and I even got a few requests.

If my friends had "played favorites" with me and allowed my not-quite-ready-yet manuscript to slide through into the agent rounds of the contests, the agents would have been tired of seeing my pitch by the time I was actually ready. Which would have hurt my chances in the long run, and not helped at all.

And so, a year later, I am so grateful for these contest judges (still friends of mine) who had the courage to face hundreds of hopeful authors, like me, and boldly say: You may not be ready yet, but keep trying. You'll get there.

And I'm trying my luck with Pitch Madness again this year. I have a brand-new, never-been-pitched-before, polished and shiny manuscript. And this is truly the best novel I've ever written. It might even be "The One." But if it's not, I'll learn from this failure too... and my next novel will be even better. (I'm already in love with the new story. It might be "The One!")

Update: It turns out that the polished and shiny manuscript I was working on was indeed "The One!" My debut novel, TWELVE STEPS, will be published by Swoon Romance in March 2014!
Posted by Veronica Bartles at 4:00 AM