When the Lines Between Fiction and Reality Blur

You've all probably heard me anxiously counting down to the release of Rachel Harris' latest YA novel, THE FINE ART OF PRETENDING. It's no secret that I love Rachel's writing, but this book is, hands-down, my favorite of her novels so far. Because I've totally been there, and I could identify with Aly more than any other fictional character that didn't spring forth from my own brain. 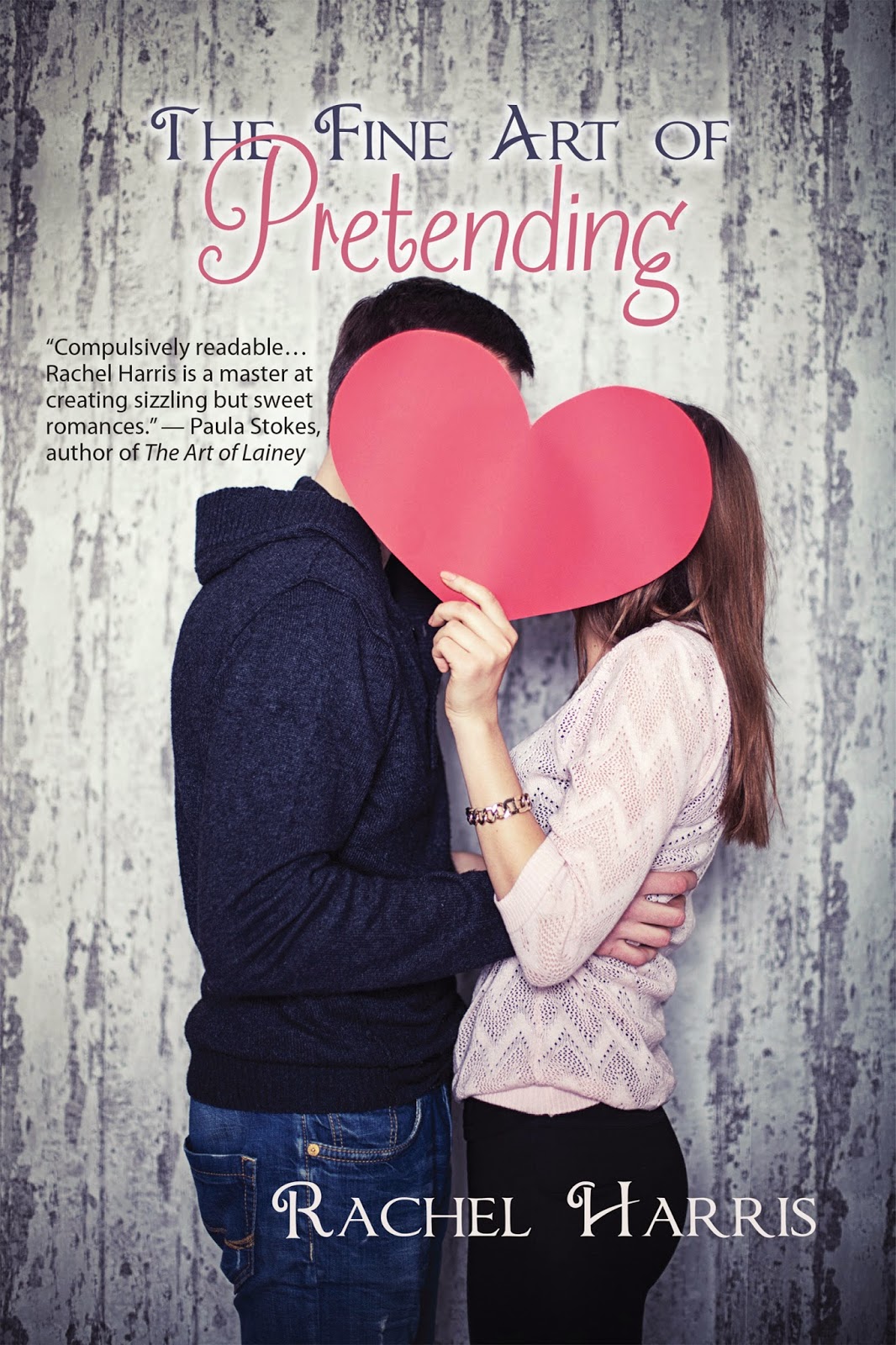 The official blurb:
According to the guys at Fairfield Academy, there are two types of girls: the kind you hook up with, and the kind you're friends with. Seventeen-year-old Alyssa Reed is the second type. And she hates it. With just one year left to change her rank, she devises a plan to become the first type by homecoming, and she sets her sights on the perfect date—Justin Carter, Fairfield Academy’s biggest hottie and most notorious player.

With 57 days until the dance, Aly launches Operation Sex Appeal and sheds her tomboy image. The only thing left is for Justin actually to notice her. Enter best friend Brandon Taylor, the school’s second biggest hottie, and now Aly’s pretend boyfriend. With his help, elevating from “funny friend” to “tempting vixen” is only a matter of time.

But when everything goes according to plan, the inevitable “break up” leaves their friendship in shambles, and Aly and Brandon with feelings they can’t explain. And the fake couple discovers pretending can sometimes cost you the one thing you never expected to want.

Rachel admitted to her street team, the Flirt Squad, that THE FINE ART OF PRETENDING was inspired by an actual conversation she had with a group of guy friends in high school, and she challenged us to write a blog post about a high school memory that would make an excellent book or movie.

As you know, my high school diaries are full of such memories. In fact, my own debut young adult novel, TWELVE STEPS, was inspired by many, many real-life moments in my own high school memories. I've already shared many of those memories with you all, and I guarantee that I'll be sharing more such memories in the future. (And can I say "memories" one more time in this paragraph?)

But this week, all I can think about is how my high school diaries could have easily inspired THIS book. (Is there any wonder that Rachel and I have said for months that our characters could have been friends?)

Like Aly, I was labeled a "commitment" instead of a "casual" in high school.

I had at least 5 different boys describe to me in great detail what our lives would be like one day when we grew up and got married. They knew how many kids we were going to have, where we would live (right down to how many bedrooms our future houses would have), even the kind of jobs we'd probably wind up with. (People always talk about the way girls start planning their wedding days from the time they're old enough to start toddling down a make-believe aisle. From the conversations I've had, I sometimes wonder if boys start dreaming of their future families at a similarly early age.)

Yet none of these boys who planned to marry me when we grew up wanted to try dating me when we were still in high school. (Years after we graduated, several of these boys admitted, "I wanted to ask you out, but I wasn't good enough for you back then.")

So I absolutely understand Aly's frustration with her label. And I totally get her determination to change her status from "automatic friend-zone" to "dating possibility."

I've always kind of rolled my eyes at the "we'll pretend we're a couple to make someone jealous" trope in books and movies. As much as I absolutely adore the plot device (some of my favorite books and movies of all time include the "let's pretend we're in love" story line), I've never really believed that such a thing could happen believably in real life.

Until I started looking back through my high school memories for this challenge.

* There was the guy friend who wanted to make his ex-girlfriend jealous. So I wore his leather jacket (the one he never let anyone touch - not even the aforementioned ex-girlfriend, when they were still dating) and we went for a walk past her house, when we knew she'd be outside to see us holding hands and looking all lovey-dovey. (Theirs was a very on-again-off-again relationship. And whenever he wanted her to take him back, all he had to do was pretend he was inches away from getting together with me.)

* There was the time the guy with a reputation for being the biggest flirt in our class started showing interest in me. And it looked like he might even ask me to the Prom. My best guy friend knew I kind of had a crush on this guy, but he decided that Mr. Flirt wasn't good enough for me. So he told everyone in our class that I was absolutely off-limits, and then he ramped up the friendly hugs, etc. until everyone thought we were a couple. I've gotta admit. I was kind of furious about this one, because I didn't even agree to the "let's pretend we're together" act, and I didn't even find out about it until suddenly every guy I was even slightly interested in stopped talking to me. (Not to mention the trouble it caused when his girlfriend found out everyone in school thought he broke up with her for me.)

* There was the time a guy at work was bugging me. So my guy friend offered to stop by when I was at work and pretend to be my boyfriend for a few days, until the co-worker got the hint and backed off. We spent hours planning the choreography. And the conversations we'd have. (How cutesy did the pet names have to be? How touchy-feely did we have to get to really sell the fiction? Of course, there would have to be a kiss or two ... but how passionate? Would a kiss on the cheek be enough? A peck on the lips? Or a full-blown make-out session right there in public?)

In the end, we didn't actually go through with it. Because I started worrying about what his girlfriend (!!! Yes, my friend had a girlfriend at the time - most of my guy friends had girlfriends, and surprisingly, their girlfriends never really liked me much - but she was out of town, so maybe we could have gotten away with it) ... I worried about what his girlfriend might say if she found out about our little charade when she got back. My friend kept assuring me that his girlfriend would be totally okay with it. She knew there wasn't anything REALLY going on with us, and she'd understand the need to get this creepy co-worker off my back.

But, yeah, my friend wasn't a teenage girl. And even though his girlfriend was extremely secure in their relationship, I can assure you, there's no way she would have been okay with it.

* And there was the first time a boy shattered my heart. I was devastated, but determined not to let the boy know he'd hurt me. So one of my dad's college students offered to show up at a state speech and debate tournament to flirt with me shamelessly in front of the boy. It probably would have worked too ... except this college guy got his signals crossed, and he came over to do his massive flirting act in front of the wrong boy. The boy I was trying to make jealous wasn't even around, but I couldn't say anything to the college guy, because then everyone would know his flirting was just an act!

None of my "let's pretend we're together" moments led to the real romance it always leads to in fiction. There were a couple of almosts ... Like the guy who asked me to go to a dance with him to show his ex-girlfriend he wasn't pining away for her (even though he totally was). We went out on several other dates after that, and we had a lot of fun together, but he kept thinking about the ex, and I couldn't actually imagine kissing him, so it fizzled before it really began. ... Or there was the guy who flirted with me in class, to make the guy I'd had a crush on forever jealous. (Crush guy didn't notice, and before long I'd developed a crush on flirt guy, who admitted he didn't think of me "that way.") ... Or the guy who was just a friend, but who everyone in our social circle thought should be my boyfriend. Every time they started pressuring us to get together, we'd go out on a few dates to get them off our backs, and then go back to being just friends again. (Ironically, this is the only boy I ever went out with more than once or twice. We had 2-3 dates per year all through high school. And there was never any real chemistry between us, but he was the most fun fake boyfriend ever.)

Even though it didn't work out in real life like it does in fiction, the "pretend boyfriend" trope was a staple of my high school life. Is it any wonder I love the plot device in books? And movies? And TV shows?

Posted by Veronica Bartles at 11:40 AM