I love the Camp Boyfriend series by J.K. Rock, and I'm so excited to be a part of the Release Week Blitz & Blog Tour for the latest in the series: CAMP PAYBACK!

Alex has big plans for camp this year, starting with making it the best summer ever. Having fun and breaking some rules will get her the payback she wants against her parents and her ex-boyfriend. Because of his disgusting texts, she's headed to a super strict all-girls school in the fall. Then she meets Javier and revenge doesn't seem nearly as important as getting to know the troubled loner determined to keep a low profile at camp. But Alex's trouble-magnet personality and Javier's need to stay in the background don't mix nearly as well as their irresistible chemistry. With her home life eroding under her feet and her last year of summer camp speeding to a close, Alex wants to make her mark on the world and squeeze every bit of fun out of her time with Javier. Too bad her old plans for revenge turn back on her just in time to ruin everything. Will she lose Javier too?


I'll be posting my review for CAMP PAYBACK on  Thursday, but today, I have a special guest post for you from the fabulous J.K. Rock


In our April release, CAMP PAYBACK, our main character, Alex Martineau, is determined to get payback against her parents and her ex-boyfriend. His disgusting text prompted them to banish her to a super-strict all-girls school when summer’s over. All she has is two months to have fun and get into a little, innocent trouble. And I can relate! As a teenager, my eleventh grade Social teacher took discipline to Hitler level. In fact, he was impressed with the Nazis and spent a lot of time making fun of the ‘weak’ Mussolini and the Italians in WWII. This really bugged me and my friend Laura because we were the only two Italians in the class, besides hot Greg Brienza who slept through most of class and never noticed.

I was one of those girls like Kayla, the main character in our third novel in the series, CAMP FORGET-ME-NOT, who never said her real thoughts out loud. I was too afraid of making other people upset or that they wouldn’t like me. But my best friend, Laura, was- and still is- like an extension of me. I could tell her anything. We talked a lot about how much we hated our Social teacher for making insulting comments about Italians. Worse yet, Mr. M would point to Laura and I (and a dozing Greg) after saying them and ask us if we agreed. As if! Since Laura was quiet (in front of adults) like me, she just shrugged. But inside, she was boiling too, especially when Mr. M made jokes to get the rest of the class laughing at Italians.

Christmas came and a brilliant, but risky payback plan came to us while we were in the mall. We passed a store that sold cheap lingerie, and I commented how funny it would be to give something like that to our uptight teacher. To my surprise, Laura hauled me in there and we bought the tackiest set of red, ruffled, see-through lingerie I’d ever seen. We couldn’t stop laughing every time we pulled it out of the bag. Since we were having a sleepover, we wrapped it up that night and put a big bow on it. We couldn’t wait until Monday to sneak it onto our Social teacher’s desk. For the first time, ever, I couldn’t wait to get to school. Before Social, I asked to go to the bathroom before the bell rang. I grabbed the present from my locker (hidden in a bag) fast-walked to Mr. M’s room and peaked in. Luckily he wasn’t there and I put the present on his desk before dashing back to my other class. I gave Laura a thumbs up as we walked to his class, and we had to hold in our smiles when we took our seats.

Mr. M came in after the bell and made a big fuss when he spotted the present. He exclaimed at what a nice surprise it was from our class and since everyone was basically afraid of him, no one denied that they’d given it to him. It took every ounce of will power not to look at Laura as he undid the elaborate wrapping, lifted the box cover and pawed through the layers of tissue paper. His dumfounded, shocked expression was priceless when he held up the lingerie, trying to figure out what it was. The class was hysterical with everyone laughing and finally, I could give in and join them. It was awesome. Mr. M got so mad that his face turned purple, especially when Greg Brienza (who’d woken at all the noise and seen the gift) fell backwards in his chair from laughing so hard.

Laura and I, ‘the innocent quiet girls’, got away with this payback prank. To this day, no one- except now you- knows we were behind it. It became a legend in our class and school and- poor Greg Brienza- got detention for ‘distracting the class’. Mr. M blamed him and muttered something about Italians… but it was the last negative thing he said about our nationality. Justice was served!

J. K. Rock is the pseudonym for YA writing partners - and sisters-in-law - Joanne & Karen Rock. Although they started out sharing an annual shopping trip, they ended up discussing their favorite films and books, joining the same book club and talking about writing... a lot. Their debut novel,Camp Boyfriend, is the first in a three-book series plotted during family pool parties. Their creative partnership is unique in that they enjoy passing a book back and forth, each adding a chapter and fine-tuning the chapter before. Years of friendship has yielded a shared voice and vision for their work that makes writing a pleasure. Learn more about Karen and Joanne at http://jkrock.net 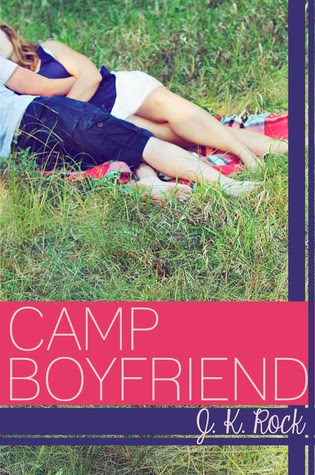 The summer of her dreams is about to get a reality check.

They said it couldn't be done, but geeky sophomore Lauren Carlson transformed herself into a popular girl after moving to a new school halfway across the country. Amazing what losing her braces and going out for cheerleading will do. Only trouble is, the popular crowd is wearing on Lauren's nerves and she can't wait to return to summer camp where she's valued for her brain instead of her handsprings. She misses her old friends and most of all, her long time camp-only boyfriend, Seth. This year she intends to upgrade their relationship to year-round status once she's broken up with her new, jock boyfriend, Matt. He doesn't even begin to know the real her, a girl fascinated by the night sky who dreams of discovering new planets and galaxies.

But Matt isn't giving her up without a fight. As he makes his case to stay together, Lauren begins to realize his feelings run deeper than she ever would have guessed. What if the guy she thought she was meant to be with forever isn't really The One? Returning to Camp Juniper Point was supposed to ground her uprooted life, but she's more adrift than ever. Everything feels different and soon Lauren's friends are turning on her and both guys question what she really wants. As summer tensions escalate, Lauren wonders if she's changed more than she thought. Will her first big discovery be herself?

a Rafflecopter giveaway
Posted by Veronica Bartles at 8:30 AM