I recently participated in the cover reveal and book blitz for CAMP CHRISTMAS (#1.5 in J.K. Rock's Camp Boyfriend series), and I realized that I never posted a review for the book that started it all: CAMP BOYFRIEND.

Official Blurb:
The summer of her dreams is about to get a reality check.

They said it couldn't be done, but geeky sophomore Lauren Carlson transformed herself into a popular girl after moving to a new school halfway across the country. Amazing what losing her braces and going out for cheerleading will do. Only trouble is, the popular crowd is wearing on Lauren's nerves and she can't wait to return to summer camp where she's valued for her brain instead of her handsprings. She misses her old friends and most of all, her long time camp-only boyfriend, Seth. This year she intends to upgrade their relationship to year-round status once she's broken up with her new, jock boyfriend, Matt. He doesn't even begin to know the real her, a girl fascinated by the night sky who dreams of discovering new planets and galaxies.

But Matt isn't giving her up without a fight. As he makes his case to stay together, Lauren begins to realize his feelings run deeper than she ever would have guessed. What if the guy she thought she was meant to be with forever isn't really The One? Returning to Camp Juniper Point was supposed to ground her uprooted life, but she's more adrift than ever. Everything feels different and soon Lauren's friends are turning on her and both guys question what she really wants. As summer tensions escalate, Lauren wonders if she's changed more than she thought. Will her first big discovery be herself?

I actually read CAMP KISS, the prequel novella, before reading CAMP BOYFRIEND, so I was already head-over-heels in love with Seth going into this story. Like Lauren's friends at camp, I wasn't sure I liked the new Lauren, and I wanted to bring her back to the reality I knew. I didn't even want to give Matt a chance.

Seth was the perfect boy for Lauren. He knew the real girl behind the popular facade she worked so hard to construct. Seth and Lauren had history, and he was in love with her long before she ditched the braces and picked up a pair of pom poms. Obviously, he was the boy she was meant to be with. Matt could never compete with that kind of connection. ... But the harder Matt worked to keep Lauren, the more he won me over, and by the time I was halfway through the book, I didn't know which boy I wanted to win in the end. (Don't want to spoil the ending, but I will say that I totally swooned when Lauren finally realized which boy was perfect for her.)

But the best thing about this series isn't the swoon-worthy love story. I absolutely love the eclectic ensemble of characters that come together each summer at Camp Juniper Point, each group defined by their cabins. The adorkable boys from The Wander Inn (Seth's cabin). The mean girls of Divas' Den (who may not be as mean as they appear). The jocks of Warriors' Warden (where Matt fits right in). And the girls who make up Lauren's camp family: her friends in Munchies' Manor. Alex, Lauren's best camp friend, Siobhan, the studious one, Piper, the tree-hugger, Trinity, the artist, and Jackie, the athlete. I wanted to jump into the pages and become friends with each and every one of them!

I can't wait to continue the fun with the next book in the series (CAMP PAYBACK - coming in April 2014)!! You can find the whole Camp Boyfriend series on Goodreads.
The fabulous Joanne and Karen Rock (aka J.K. Rock, authors of the Camp Boyfriend series) have given me an autographed copy of CAMP BOYFRIEND to share with one lucky winner, and I'm throwing in a Piper-approved charm bracelet, hand-knit from yarn made out of recycled plastic bags! 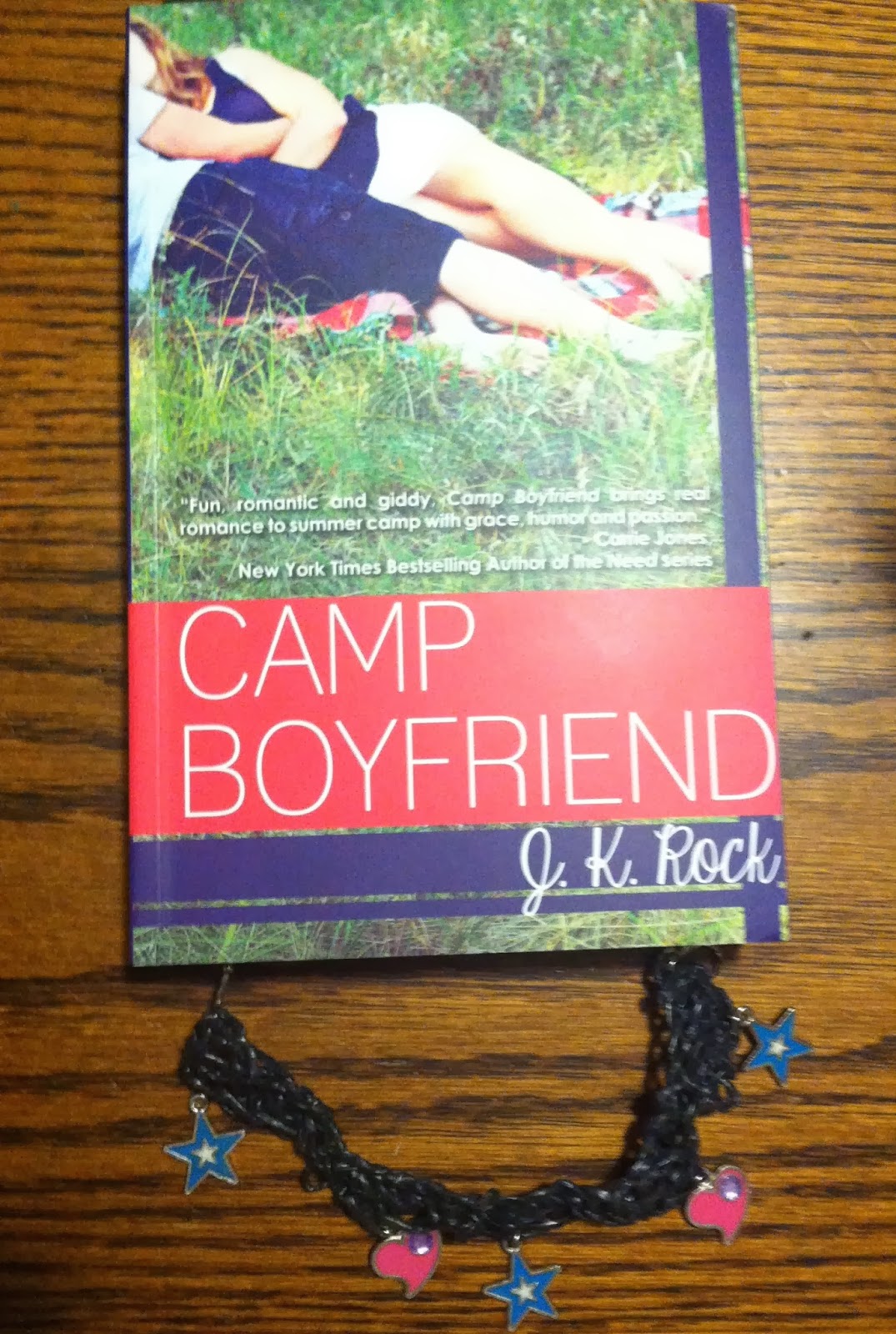 Want to read it now? I don't blame you! Get your own copy here:
Amazon (kindle) (paperback) | Barnes and Noble | Kobo | The Bookdepository

About the Authors:
Sisters in law Joanne and Karen Rock write Young Adult books under the pseudonym J.K. Rock. They bonded on a set of bleachers, watching their respective Rock boyfriends play baseball, and later, as young wives married into the same big family. Today, they have fun reliving teen drama on the pages of their YA books in their ongoing Camp Boyfriend series, which reviewers have noted for its authentic treatment of navigating relationships and self-identity. Individually, Joanne and Karen write adult romance books for Harlequin. Joanne is a three-time RITA Award nominee and Golden Heart winner. Her books have been reprinted in twenty-six countries and translated into twenty different languages. Karen's debut romance, WISH ME TOMORROW, has garnered critical acclaim for its sensitive portrayal of a cancer survivor's journey. You can learn more about their upcoming projects and previous releases at http://jkrock.net