I'm so excited to share the beautiful cover for my debut novel, TWELVE STEPS, with you!! 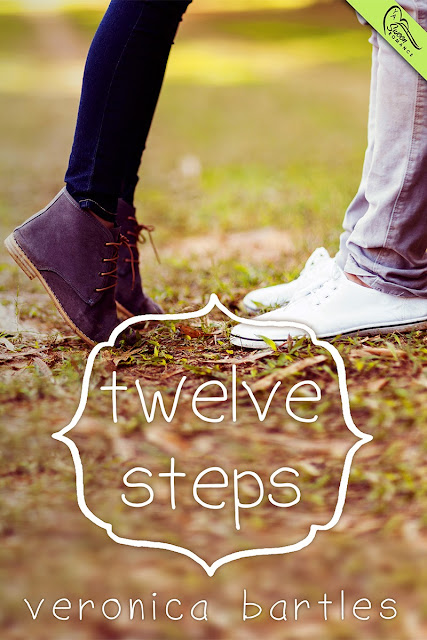 I've been staring at this cover for a couple of weeks, anxiously waiting to share it with you all. And the more I look at it, the more I notice tiny details that make this cover absolutely perfect for this book.

First of all, those cute boots in the picture? The very first thing my daughter said when she saw this cover was "Andi would definitely wear those boots!" - And she's right. This is, without a doubt, a picture of Andi's feet. :) (She's even wearing the skinny jeans she loves so much.)

And I can tell, just by the way he's standing, exactly who Andi is reaching up to kiss in this photo. I never thought feet were so expressive, but I recognized my guy (or should I say Andi's guy?) immediately. I even know when and where this scene is happening. And it's one of my favorite parts of the story. But I'm not going to tell you. You'll have to wait and read it yourself, when the book is released: 25 March 2014.

The best part, though, for me is a detail most people will probably never notice (unless, of course, they read this blog post!): TWELVE STEPS is set in Wyoming, and the grass Andi and her guy are standing on here totally looks like a patch of Wyoming lawn in the spring - mostly brown, with just a hint of green over a still-slightly-frozen patch of ground. If I took you on a tour of my Wyoming hometown, the basis for the setting of my novel, and pointed out the spot I imagined for the scene portrayed here, you would totally agree that the cover designer must have reached into my brain to pull out the perfect picture for the cover design.

TWELVE STEPS should be available on Goodreads soon, so you can add it to your "To Be Read" list. In the meantime, here's a little bit about the book:

Sixteen-year-old Andi is tired of being a second-class sibling to perfect sister Laina. The only thing Andi’s sure she has going for her is her awesome hair. And even that is eclipsed by Laina's perfect everything else.

When Andi’s crush asks her to fix him up with Laina, Andi decides enough is enough, and devises a twelve-step program to wrangle the spotlight away from Laina and get the guy.

Step 4: Make a list of her good qualities. She MUST have more than just great hair, right?

Step 7: Demand attention for more than just the way she screws things up.

When a stolen kiss from her crush ends in disaster, Andi realizes that her twelve-step program isn’t working. Her prince isn’t as charming as she'd hoped, and the spotlight she’s been trying to steal isn’t the one she wants.

As Laina’s flawless façade begins to crumble, the sisters work together to find a spotlight big enough for both to shine.
Posted by Veronica Bartles at 12:00 AM