It's always bothered me when people are defined by one characteristic, whether that might be skin color, religion, gender, ethnicity, or any other minor (or major) detail that is certainly a part of who that person is, but could never fully encompass all that they are. So when I saw MY BASMATI BAT MITZVAH on NetGalley, I was thrilled to see a character who is both Indian and Jewish, and who fully understands that she is more than just the sum of those parts. I immediately requested a copy for review, and Yay!! My request was approved. 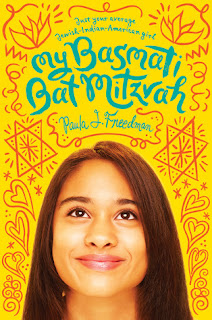 The official blurb:
During the fall leading up to her bat mitzvah, Tara (Hindi for "star") Feinstein has a lot more than her Torah portion on her mind. Between Hebrew school and study sessions with the rabbi, there doesn’t seem to be enough time to hang out with her best friend Ben-o--who might also be her boyfriend--and her other best friend, Rebecca, who’s getting a little too cozy with that snotty Sheila Rosenberg. Not to mention working on her robotics project with the class clown Ryan Berger, or figuring out what to do with a priceless heirloom sari that she accidentally ruined. Amid all this drama, Tara considers how to balance her Indian and Jewish identities and what it means to have a bat mitzvah while questioning her faith.

Tara is such a fully-formed, realistic character. More than just a stereotypical "kid struggling with her faith" or "girl who feels like she's on the outside because of her ethnicity." Her religion, her heritage... these are only a part of who she is. Tara is also creative and funny, and she kicks butt in the school robotics competition every year. And as she works to discover who she is and what she wants, her relationships with her family, her classmates, and her two best friends develop in ways she never expected.

** I identified with Tara on a personal level as well. I still vividly remember when I was a child, preparing for my baptism, and I realized that I didn't know if I believed the things that my parents did. Like Tara, I didn't want to make a commitment that I wasn't absolutely certain I was ready for. (The experiences I had in finding my own faith - a faith that didn't rely on my parents' beliefs, but that was fully my own - shaped me into the person I am now.)

Posted by Veronica Bartles at 6:12 PM