The Next Big Thing

Guys, I am SO excited!!!! Like, dancing around the house, making up silly songs and laughing at absolutely nothing excited!!!

For the first time ever, I've been tagged in one of those blog hop Question & Answer thingamajigs that all of my *real* writer friends get to participate in!! I guess this means that maybe I'm a *real* writer now too, right? (Please say yes.)

I was tagged by my amazing critique partner, Ashley Turcotte, who is writing a YA fantasy novel that I absolutely adore and can't wait to finish reading! (Hop on over to her blog and read about it yourself. And if you're on twitter, you should follow her there, because she's awesome!)

So, without further ado, here are my answers to the questions! (I actually have several manuscripts that I'm working on right now, but this one is my favorite, and it's the one Ashley hinted about when she tagged me, so I had to pick it for this post!)

What is the working title of your book?

Where did the idea come from for your book?

It came from a one-page "fan fiction" my little sister wrote after she read the manuscript for my first (as yet unpublished) novel, KISSING FROGS.


What genre does your book fall under?

Which actors would you choose to play your characters in a movie rendition?

I'm horrible with this kind of thing, because I'm not very good at noticing celebrities... but maybe someone like Lily Collins (but a little bit younger) could be Andi...

* Jarod could probably be played by someone like Nick Jonas, but taller and with green eyes.

* Daren Kagasoff or Shane Harper (except with blue eyes) would make a good Shane.

* My first thought for Dave would be someone like a younger version of James Marsden, in that cocky, sure-of-himself attitude (as in the movies Enchanted and 27 Dresses), but he probably looks more like a cross between Logan Henderson (the hair & the mouth) and Carlos Pena (the eyes & the facial structure)

* Laina would probably have to be an unknown actress, because I couldn't find anyone who has the right look. 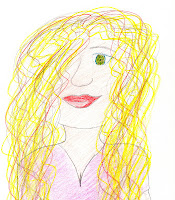 ﻿
This is the picture I drew of Laina, when I was challenged to draw a picture of my main character (from KISSING FROGS, the other novel that 12 STEPS is based off of) - I'm not much of an artist!

* I really wish I could post a picture of the person I imagine when I think of Nick (who is only a minor character, but he's one of the most important minor characters, and he's probably my favorite character in the story), but he's based on a real person - the guy I had a MAJOR crush on in high school, but he was so out of my league that I didn't even have the nerve to admit it to my diary. I couldn't find an actor who even came remotely close to living up to the image in my head. Sorry!﻿

What is the one sentence synopsis of your book?

Andi knows she will never be as good as her perfect older sister, but with the help of her 12-step process (adopted from the 12-steps of AlaTeen), she may learn to accept life as a "Second Class Sibling."

Will your book be self-published or represented by an agency?

I'm hoping it will be represented by an agency, because I have no sense for business, and I need someone to walk me through that kind of stuff. I don't think I could self-publish successfully.

How long did it take for you to write the first draft of your manuscript?

﻿﻿Umm... it's not quite finished yet. (I'm hoping to finish the first draft by the end of this week, or early next week, which would mean it took about 1 1/2 months to write.)

What other books would you compare this to within your genre?

I always hate doing this part, because I feel like such a wannabe when I start comparing my unpublished babies to *real* books by *real* authors... but if I have to pick, I think I'll have to go with something along the lines of GEEK CHARMING by Robin Palmer, JUST FLIRT by Laura Bowers or GEEK MAGNET by Kieran Scott.

Who or what inspired you to write this book?

My sister read the manuscript for my first novel (KISSING FROGS) and sent me an email with the following page of text and a note saying, "This is the novel you have to write next!" (I laughed and put it aside, but pulled it out again "just for fun" for NaNoWriMo this year.):

Many of you may have read my sister Alaina’s tale of her seriously confusing and somewhat enlightening (for her that is) senior year.  However, although it depicts the truth to the best of her abilities, let me tell you know that my wonderful older sister is completely lost.  Not in a bad way.  She just refuses to see the bad in anyone and as her friend Jared likes to say she looks at the world through “rainbows and bubbles”.  She is honestly one of the last true innocents in the world.  Thus her reality is a bit skewed….especially when it comes to seeing herself.


While she views the rest of the world as a wonder and a beauty she never seems to see that same beauty in herself.  I guess part of that is because when all of her childhood friends in elementary school were taking the training wheels off their bikes, she was putting a training bra on.   To say my sister developed early is an understatement.  She had the figure that girls in Las Vegas pay a lot of money for at the age of 12.  She was taller than most, even the boys, so of course before boys realized they liked her, they teased her.  She developed an insecurity about her looks that caused her to hide behind her smarts and try to hide her overdeveloped chest with baggy T-shirts and sweaters.  I had to lover her for her effort, but you just cannot hide an attribute like that and all she managed to do was hide the rest of her flattering figure.


I used to joke with her that she took the stock pile and left me with nothing, because in her senior year and my junior year of high school she was testing the limits of her DD bra and I was trying my best with a push up and my barely there B cup.  Obviously her large chest is not all that she is made of; just like my “sailors dream” (a sunken chest, this was the joke that was told to me my 8th grade year) was not all that I was made up of.


I learned young that it was going to be tough to follow in her footsteps.  Not just because of her looks, but her smarts and her drive to never disappoint anyone.  I am no idiot, I manage A’s and B’s in school without trying and I know with some effort I could have had a 4.0GPA, but Laina had already done that.  I could have been my parent’s perfect little princess, but Laina has that one down and I could have been that perfect student that the teachers all dream about having, but Laina had that base covered as well.  So I fell into my role of being fun and carefree.  I tried to be cute and bubbly and just be every ones friend.  Plus I learned early that people love to confide, so I became a great listener and I can tell you right now that I could write novels on all the deepest dirt in our little Wyoming town.
So now that you have a little bit of an understanding of how I became who I am now I hope you can see the truths as they really were and not as my silly older little sister saw them.


What else about your book might pique a reader's interest?

Lots of kissing! And tons of laugh-out-loud moments! And sibling rivalry between two sisters who are also best friends.


And now, I'm supposed to tag someone to join in the fun. Many of my writing friends have already done this, so if I tag you and you've already posted your answers, or if you don't feel like participating, just let me know and I'll take back the tag. (And if you want to participate, but I didn't tag you because I thought you already had, let me know and I'll add a tag!!) So.... Emily McKeon (@ERMcKeon on twitter), Gail Nall (@gailecn on twitter) and Wilfredo Rodriguez, do you want to play next??

P.S. I accidentally worried almost all of my twitter followers this morning, because apparently, I'm not very good at the whole 140 characters pep talk thing yet, so I thought I'd better clarify here...

I entered the amazing Pitch Wars contest (as you know from previous blog posts), and I didn't get chosen as one of the few lucky ones.... but since there were, like 2,000 entries or something, the odds of being one of the lucky 37 were EXTREMELY slim! I was trying to offer some perspective and encouragement to my fellow contestants this morning, so I pointed out that of the 2 responses I had received from the mentor judges, one loved my entry, even though she ultimately picked another one, and one didn't like it at all. I wanted people to realize that rejection isn't necessarily a reflection on your ability as a writer. (Even the mentor who really didn't like anything at all about my manuscript was encouraging in her comments about my writing ability. She even suggested another book she thought I'd write well.) Unfortunately, in 140 characters, my "pep talk" made people think I was feeling dejected. And when I tried to explain, I only made it worse, until people thought there was a mentor involved in the contest who was going around, crushing aspiring writers' dreams. This is NOT the case. She simply wasn't the right mentor for this particular project of mine. And she was honest about her reasons. And I am SO grateful! (Think about it, would you really want someone to choose you, if they didn't truly love your work? No, you wouldn't, and neither would I.)

Please don't worry about me. I'm not giving up on my writing. I'm not quitting. I'm not even giving up on KISSING FROGS. I'm just choosing to put it aside for a little bit, and I'm taking a (very) short break from twitter and blogging (though I'll still post a yummy recipe tomorrow!), so that I can focus on 12 STEPS, my "next big thing," and see where this road takes me. :)
Posted by Veronica Bartles at 4:50 PM