The More You Know: A Little Perspective on Pitch Madness

Last week, on the Sub It Club blog, I posted a behind-the-scenes look at how entries are chosen for Pitch Madness (the online writing pitch contest hosted twice a year by Brenda Drake). As I've participated in Pitch Madness a few times before and I know the devastating "I'm such a failure" feeling that hits when you don't make the final cut, I wanted to provide a little bit of perspective to all of the contest hopefuls who wouldn't make the final round this time. (As it turns out, I was one who didn't make the final cut this time around either. Although I had a few slush readers tell me that they loved my story, I didn't have enough votes to make it into the final round.) In the past few days, I've had several people tell me that the peek behind-the-scenes really helped them put the whole contest experience into perspective.
Yesterday, the Pitch Madness agent bids were revealed, and I watched it all unfold on the #PitchMadness twitter feed. I witnessed a lot of nail-biting and excitement as well as a healthy dose of disappointment and self-doubt as the big reveal unfolded, one entry at a time, over the course of the afternoon. There were a few entries that spurred intense bidding wars, as agents cast tie-breaking votes again and again. And there were a few entries that only got one bid or none. And my heart aches for the Pitch Madness hopefuls who walked away without any agent requests. Because it really sucks, I know, to feel like you've finally "made it," only to watch your friends get the attention you were hoping for.

Having been through Pitch Madness several times before, both as a contestant and as an observer, I kind of knew what to expect. And I knew there would be disappointment and nervous anxiety woven into the excitement. But this time around, I noticed something different. This series of tweets, posted on Monday afternoon by the lovely Jessica Sinsheimer, made me really stop and pay attention to the agents participating in the madness:

Writers weren't the only participants hoping and praying for good results.

Agents were just as excited about a win as the writers were. (Clarification: Please note that Lady Lioness is not an agent. She's an intern for Louise Fury, who was acting as the voice of Team Fury for the Pitch Madness reveal, which is why I grabbed a few of her tweets for this post. All actual decisions for Team Fury were made by the agent, Louise Fury, herself.)

And writers weren't the only participants who faced disappointment when they didn't get the results they were hoping for. 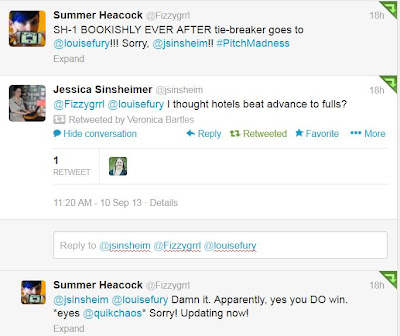 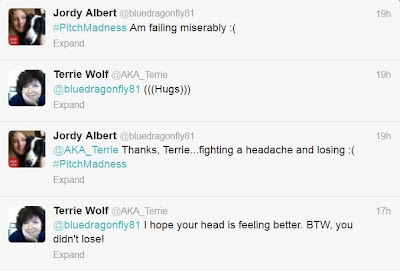 And at least once, I saw an agent kicking herself for not bidding on an entry that didn't get any bids. Why didn't she bid? Because the agent thought she wouldn't have a chance to win this fabulous pitch. 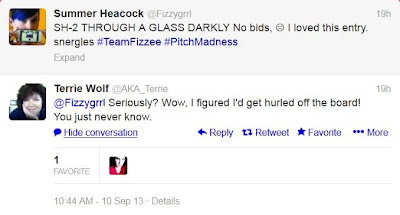 When the big reveal was finished and the dust had settled, I went through all of the Pitch Madness posts to count up the bids and compile some statistics. (Side note: some of the agents really had fun with their bid comments. I laughed my way through the entries. You should really take a moment to go read them for yourself.) And here's where I'll attempt to use those figures, combined with the tweets I witnessed, to explain what was going on in the minds of the agents during the Madness. (Note: I am not actually a mind reader, and I'm only guessing here based on my own observations and the limited conversations I had with a handful of agents after the fact. Any agents reading this blog: feel free to comment below to correct me if I get it horribly wrong!)

My first observation: Each agent had 61 bids to spend on pitches. (You can see the actual distribution of available bids here.) With 64 final pitches to bid on, even if every agent spent every single bid in the opening round, there was a possibility that some pitches wouldn't be snagged. Not because no one wanted them (remember, to get to this final round in the first place, each pitch had to get a "yes" vote from at least EIGHT different slush readers! - There were no bad entries in the bunch.), but because that's just the way statistics work.

Of course, it's completely unrealistic to think that any agent would bid on EVERY pitch. When you walk into a library or a bookstore, do you fall in love with every single title on the shelf? No. Chances are, you have favorite genres, age categories and writing styles that you look for when you pick a book. Agents also have preferences. And you wouldn't want an agent who took the grab-em-all-and-see-what-happens approach to requests. So, as you might expect, none of the agents actually spent all 61 of their bids. (In fact, none of the lowest bid denominations were played. And only 3 of the 2nd lowest cards were played.) Just like they do when going through their email slush piles, agents were selective in their choices.

My second observation: Each agent had a definite strategy for bidding.

Jessica Sinsheimer was, by far, the most aggressive bidder. She only played one of her "low card" bids ($50 - the highest of the low cards) and spent all but three of her "high cards" by the time it was all over. The strategy was kind of a risky one, but it paid off for her. She won 10 of the 57 pitches that received bids, although she had to bow out of two ties, because she'd used all of her high cards and had nothing left to bid.

(She would have lost another tie as well, but the other agent didn't come forward with a tie-breaking bid, so they both won.)

Jordy Albert was the most conservative in her bids. Of her 16 bids, 13 were "low cards." I assume she was holding the high cards to allow for tie-breaking victories. And if she'd made it to the tie-breaking rounds, she would have probably won every single pitch. Unfortunately, she was out-bid again and again (often by Jessica Sinsheimer) and only won two pitches. (I have to admit, I cried a little bit when I saw how discouraged Ms. Albert was getting by the end of the big reveal. But even the agents don't see the full picture. She didn't see, for example, the private message I got from one of the fought-over contestants who said, "And Jordy also asked for it. *happy dance*")

My third observation: The more experienced agents (those who participated in previous Pitch Madness contests) were more likely to bid aggressively. This wasn't always the case, but one agent I spoke to indicated that she didn't want to use her low card bids because she didn't think they'd win. And she was right. Only three pitches were won with a bid of $20 and only three with a $50 bid. From an author's perspective, my first instinct was to complain. "It's not fair! You had all of those $5 or $10 bids you didn't use! Even if you knew you wouldn't win, why not just throw one of those bids on there to let us know you were interested?"

But the more I stalked the agents' twitter feeds and studied the bidding patterns and chatted with agents yesterday, the more I began to suspect that there might be another side to the story. (Agents, please jump in and correct me if I'm wrong!!)

Imagine that you're an agent for Pitch Madness. You have eleven "high card" bids to vote with and ten more that are kind of middle-of-the-road. You've found twenty-one pitches you really want to request, so technically you have enough available bids to bid high on all of your favorites. But if you use all of your good plays, you won't have anything left to throw out in case of a tie, and you'll lose every single time. The answer seems simple, right? Just bid low on a few of your favorite pitches, so the author knows you're interested. You won't win, but hopefully the author will query you anyway. Then, you can save a few big votes for the tie-breakers, and you won't lose everything.

Except it's not really that simple. Because everyone will see your bids. And those authors who got your low bids might think you really aren't that interested in seeing their manuscripts. You worry that they'll compare bids and think, "Oh. She wanted at least 100 pages from everyone else, but she only wanted 20 pages from me. If she's not even excited about my manuscript, why should I bother?" Instead of encouraging the author, you're worried that your "pity vote" will be discouraging. So you don't do anything. The pitches you don't place bids on are so good, you know they'll be snatched up anyway. And maybe the author will see you tweeting about not having enough bids to go around and he'll query you anyway.

If you, dear hypothetical agent, had this selection of pitches in your slush pile, you could simply request partials or fulls of every manuscript that interested you. But in a contest, you only have so many full requests to work with. You must play them carefully, because if you're too conservative or too aggressive in the initial bidding, you might walk away with little or nothing to show for it after the tie-breaking round.

Every agent I've ever spoken to HATES rejecting manuscripts. Especially when they see true talent in the writing. Most agents seem to dislike writing rejection letters even more than I hate receiving them! It's no fun to be the bearer of bad news. And in a contest, where the results are publicly available for everyone to see, it's particularly nerve-wracking. Because even when they "win" a pitch, every agent knows that it's ultimately the author's choice. Will they send the requested manuscript? Or will they ignore your request because you weren't the agent they wanted to snag in this contest?

You think it's stressful to face rejection on your one manuscript? Imagine how it feels to be facing potential rejection on 64 different manuscripts all at once! 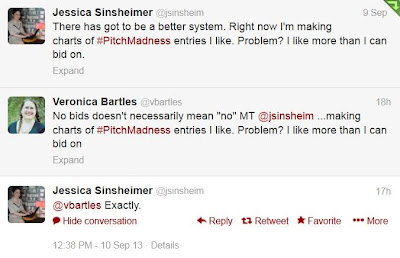 If an agent didn't request your manuscript in the contest, but their wish list says they're a perfect match, by all means, send a query. The worst they can say is "no." (But don't try to cheat and pretend it's a Pitch Madness request if it wasn't. Trust me, they know which pitches they bid on.)

And if you have Pitch Madness requests, don't keep these poor agents waiting any longer. Send your pages!! They watch their inboxes just as closely as we writers do! ;)

*Thank you so much Jordy Albert, Jessica Sinsheimer, Summer Heacock, and Lady Lioness for allowing me to use your words for this blog post! You guys are the best!!

P.S. For those of you who are interested, here is my chart with the statistics for the Pitch Madness bids (you may have to click to enlarge the image to make it readable):

Posted by Veronica Bartles at 12:54 PM