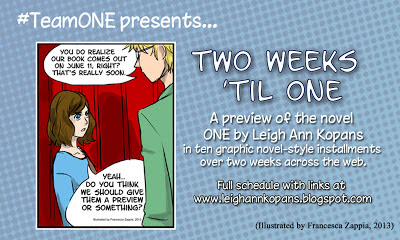 On June 11th, my friend, Leigh Ann Kopans' book: ONE will be released!
I got a chance to read an advance copy of this book, and I love it. (My review is coming next week. Look for it on Tuesday, June 11th.) I'm so excited to be a part of Leigh Ann's "street team" to help spread the word for ONE!

Here is a teaser comic to give you a taste of the story: 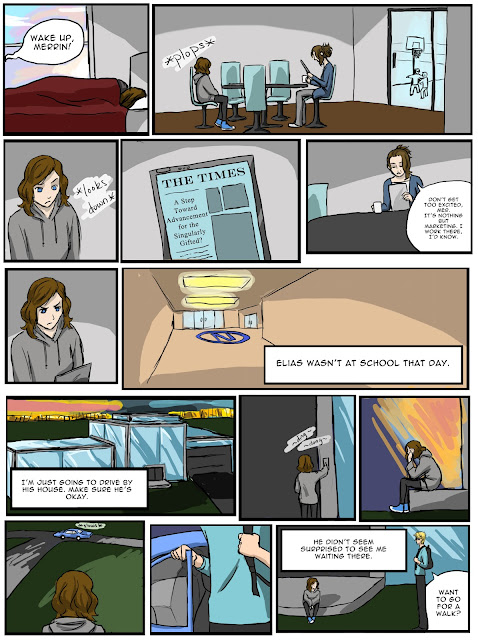 Find a full list with links to the other installments of this series on the author’s blog:  www.leighannkopans.blogspot.com

It makes you a One.

Sixteen-year-old Merrin Grey would love to be able to fly – too bad all she can do is hover.

If she could just land an internship at the Biotech Hub, she might finally figure out how to fix herself. She busts her butt in AP Chem and salivates over the Hub’s research on the manifestation of superpowers, all in hopes of boosting her chances.

Then she meets Elias VanDyne, another One, and all her carefully crafted plans fly out the window. Literally. When the two of them touch, their Ones combine to make them fly, and when they’re not soaring over the Nebraska cornfields, they’re busy falling for each other.

Merrin's mad chemistry skills land her a spot on the Hub's internship short list, but as she gets closer to the life she always wanted, she discovers that the Hub’s purpose is more sinister than it has always seemed. Now it’s up to her to decide if it's more important to fly solo, or to save everything - and everyone - she loves


Add ONE to your Goodreads and learn more about the author here: http://www.goodreads.com/book/show/17251203-one
Posted by Veronica Bartles at 8:00 AM