If you missed part 1 in my brain tumor story, click here to read it and catch up. 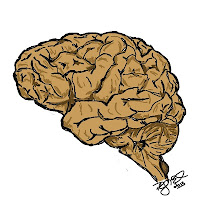 By the time my brain tumor was discovered, I had all but given up on myself. I was convinced that I was a hopeless hypochondriac, forever doomed to a life of sub-standard living, because no matter what I tried, I couldn’t stop inventing make-believe symptoms. Which meant I would never have a chance to feel better.


So when they finally discovered the tumor and I met with a neurologist who explained the options for my next step, I was practically giddy with excitement. This diagnosis, for me, was not a death sentence. It was a much-needed reprieve! I was so thrilled to discover that I wasn’t actually a crazy woman that I wanted to share my good news with the world!


As I left the neurologist’s office, on our way out to our favorite restaurant for a family celebratory dinner, I called my parents. “Good news, Mom!” I gushed, as soon as she answered the phone. “I have a brain tumor!!”


And suddenly, I realized that without the proper context (the years of questioning my sanity, the frustration over feeling sick all the time for no apparent reason, the new promise that my condition might respond to treatment), the idea of a brain tumor wasn’t necessarily joyful news.


And to make matters worse, Mom had answered the phone by putting me on speakerphone – because they were having a big, family dinner with all of my brothers and sisters that still lived in my home town. In one fell swoop, I’d managed to freak out almost my entire family!


I quickly backtracked and explained that this really was a good thing, because it meant there were options for treatment. I didn’t have to be sick all the time for no reason anymore. And by the time we hung up, my parents, siblings, nieces and nephews all told me that they understood. And they offered semi-heartfelt congratulations on my diagnosis.


Of course, they didn’t understand. Not really. Even my husband and children couldn’t truly understand the immense relief and gratitude I felt. Because they hadn’t lived inside my head with all of the doubts and fears. They didn’t know that even the scariest something was far easier to deal with than the nothing I’d lived with for so long.


Unfortunately, I was so caught up in my relief and joy that I didn’t really understand how scary this diagnosis was to everyone else. I simply expected them to be as happy about it as I was.


As word spread about my brain tumor, people started treating me differently. I had always been the person that people would come to for help, the one everyone looked to for strength, to lift them up when they stumbled. And I was comfortable in that role.


Suddenly, my friends and family were tiptoeing around me, walking on eggshells, acting like I was a fragile, porcelain doll who might break if someone breathed on me the wrong way. I was no longer “Veronica.” I was “the girl with the brain tumor.”


My brother (a junior in high school at the time) volunteered to come live with us for a year, to help out while I went through radiation treatments. Friends and acquaintances from church volunteered to babysit my children each morning as I travelled from Beale AFB to the UC Davis Cancer Center in Sacramento, CA (about an hour drive) for my treatments and various follow-up appointments. My husband’s commanding officer coordinated the squadron to bring us dinners from time to time, so I wouldn’t have to cook.


And I appreciated all of the help, even though I sometimes chafed at my brother’s attempts to care for me (I didn’t need permission to stay up past my “bedtime,” if I wasn’t sleepy!), and sometimes dropping my children off at the home of the friend who had volunteered to babysit took us a half-hour or more out of our way. I knew they all meant well. They were doing what they could to help, when they felt completely helpless. And I had to allow them to do so.


Still, it was probably the most frustrating period of my life. Even more than dealing with an unidentified, mysterious illness. I didn’t want to be “the girl with the brain tumor.” I wanted to be “Veronica” again, and I was tired of the way everyone stared at me with pitying looks. I didn’t want to be the charity case.


When, a few months after my diagnosis, my whole extended family gathered at my grandmother’s house in southern California for Christmas, my frustration over this new challenge came crashing down.


One afternoon, we decided to go for a walk on the beach. We were strolling along, enjoying the sand and the crashing waves, and in this, my favorite setting, I was finally feeling a little bit like my old self again. Until my mom glanced over at me to say something and stopped dead in her tracks, a look of horror on her face. “Who let Veronica carry the baby?” she demanded. “She might drop her!” (For the record, I had let myself carry the baby, since the baby in question was my own little girl, and I had been carrying her around just fine for six months without ever dropping her.) I expected the rest of my family to tell Mom she was overreacting, but instead, they reflected the same terror. No one had thought about it before, but as soon as Mom pointed out the danger, it was abundantly obvious to everyone that I couldn’t be trusted with such precious cargo.


I handed over my baby girl and not-so-graciously accepted the help of my brothers, who suddenly realized that I shouldn’t be walking on a foundation as slippery as sand without someone on either side of me to hold me up.


I came home from this vacation in tears. For the first time, I began to realize that this brain tumor diagnosis, which hadn’t changed much in my own life, except for the better, was a terrifying death sentence waiting to happen, as far as everyone else was concerned. I didn’t want to be “the girl with the brain tumor” anymore! I wanted to be myself!


That’s when I met Anikai.


She had been visiting family for an extended period, so she wasn’t around when we moved to Beale. And she wasn’t there to hear about my brain tumor diagnosis. So she didn’t know she was supposed to tiptoe around me. She sat next to me in church one day, and we started talking easily. I quickly realized that she didn’t know about my tumor, and I was grateful for a new friend who could see me as just plain Veronica.


Then, a mutual friend sat beside us and asked, “Oh, Anikai, have you met Veronica? She’s the one with the brain tumor.”


And Anikai responded in the best way possible: “Oh! You have a brain tumor? My mom died from a brain tumor!”


The room went silent. Everyone was afraid to even breathe, waiting for me to break down in tears. Because, obviously, you don’t mention the D-word around someone with a brain tumor! And poor Anikai looked like she wanted the floor to open up and swallow her. She had only wanted to let me know she understood a little bit of what I was going through, and now she was afraid I thought she was telling me I was going to die.


Second lesson learned from my brain tumor: Most people are well-intentioned, even if they don’t always know the best way to support you. I didn’t really need babysitters for my children during my radiation treatments. The cancer center had a large waiting room full of toys and books to keep them busy during my fifteen-minute appointment each day, and the doctors, nurses, and technicians were used to family members coming along. But I forged some lasting friendships with the people I allowed to help me. Sometimes, it’s better to smile and graciously accept the offered service, even if it’s not actually as helpful as they want it to be.


Third lesson learned from my brain tumor: An illness doesn’t define a person. And life doesn’t stop at diagnosis. If you have questions about what someone is going through, it’s okay to ask, as long as you do so with respect. Sometimes, “My mom died from a brain tumor!” is more helpful than “Oh, you poor thing.” (Honest reactions are appreciated, even when they aren’t necessarily the most diplomatic responses.)


*Side note: A few years after that first conversation sealed our friendship, Anikai and I were in a book club together. One evening, the book we were reading led to a discussion of dealing with a parent’s death. Anikai grinned at me and said, “My mom died from a brain tumor.” And then we both started giggling uncontrollably. The other ladies in the book club didn’t know what to make of these two insane people who thought death-by-brain-tumor was so freaking hilarious!