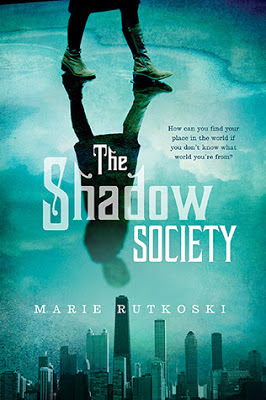 I picked up THE SHADOW SOCIETY by Marie Rutkoski rather reluctantly. When it arrived in a shipment of books to review, I set it aside as one I was certain I wouldn't enjoy. The blurb was somewhat interesting, but between the cover art and the first sentence ("Knowing what I know now, I'd say my foster mother had her reasons for throwing a kitchen knife at me."), I was certain this book would be much darker than the books I usually like to read. But this one totally surprised me. By the end of the first chapter, I was hooked!
Darcy Jones can’t remember anything about her life before she was found abandoned outside a Chicago firehouse when she was five years old, although she finally feels like she might have found a place to belong, with a foster mother who genuinely seems to care and a small group of friends she can count on at school. But when Conn McCrea, the new boy at school, takes an interest in her, vague and confusing memories start to surface in Darcy’s mind, and she feels like she’s losing control. When Conn betrays and drags her through a portal into an alternate reality, Darcy is forced to accept the fact that she belongs to a different dimension, where the Great Chicago Fire never happened, and where a deadly group of beings, the Shades, terrorize the human population. Darcy, a Shade herself, agrees to infiltrate the Shadow Society, to help uncover their latest terrorist plot, but as she delves deeper into the Society, she finds herself questioning everything she’s learned.

As Darcy struggles to discover the truth about where she belongs, readers are swept along on a thrill ride that will keep them guessing until the end, when Darcy finally discovers that she cannot ignore either half of her heritage if she wants to save the worlds, and the people, she loves. Rutkoski explores issues of racial profiling and terrorism, allowing readers to empathize with both sides of the war and to realize that wars such as this are never clear-cut cases of good vs. evil. This book will appeal to readers of paranormal romance or thrillers, and those who, like Darcy, wonder where and even if they fit in.
Posted by Veronica Bartles at 12:13 AM