My Favorite Books: Why Do I Love Them?

As promised, tonight I am tackling Conference Challenge #2 from the SCBWI MD/DE/WV blog. The challenge?
"I want you to make a list of all your favorite children’s books throughout the years: When you were a kid, when you were in middle school, as a teenager, and as an adult.
Then ask yourself. Why do I love this book?...How can I use these elements to improve my current work-in-progress?"

It seems like a fairly easy challenge, but I've been putting it off and kind of dreading it for nearly two weeks now. Because choosing favorite books is like choosing a favorite food. I can't do either one. Sometimes, I'm in the mood for something sweet and soft. Sometimes, I want something a little bit salty. Sometimes, I really need something that has a kick to it. My favorites have always changed from moment to moment, depending on my mood. So to truly pick my favorite books throughout the years, I would have to list 75% of all the books I've ever read.

But of course, I can't list them all. Once again, I'm grateful for the wisdom of the blog administrators who advised: "Set your timer for thirty minutes, dig deep with this one, and have fun!" The timer is set. For the next thirty minutes, I'll walk you through my life in books, and we'll see where it takes us. :) 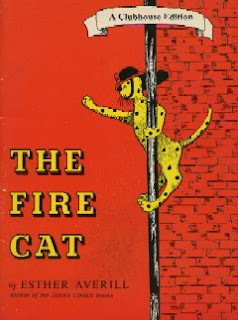 My very first favorite book was THE FIRE CAT by Esther Averill. I loved this book so much that I wanted to read it constantly! Of course, at four years old, I couldn't read yet. So I would bring it to my big sister and beg her to read it to me - sometimes 7 or 8 (or more) times in a row!! She got tired of it really quickly, and she started skipping words on the page to make the story go faster. Unfortunately, I had the book memorized by this time, and I called her on it every single time she tried to skip a word. So finally, she simply taught me how to read so that I could read the book to myself!

Why did I love this book so much? Pickles, the fire cat, was a character I could identify with. He was a cat that was destined for greatness... but he was a little bit awkward and felt like he didn't quite belong, and sometimes, he made wrong choices, because he didn't know what else to do with himself.  But his friends didn't give up on him, and eventually, he learned to channel his energies into something good. 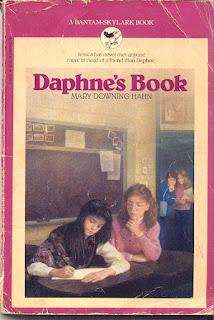 When I was in 5th or 6th grade, I loved DAPHNE'S BOOK by Mary Downing Hahn. I wanted to be a writer, and I was thrilled to find a book about someone my own age who was a writer too. But even more than that, I felt Jessica's struggle as she tried to be a friend to Daphne, but worried about what the other kids in class might say about her. Jessica wanted to be someone great, but she didn't know how to get there. And so she made choices that hurt her friend. Once again, I connected with an awkward character who wanted to be more than she felt she was capable of. I cried when she chose to shut Daphne out, and I rejoiced when she got a second chance to try to fix her mistakes. Because it's a middle grade book, and not an early reader, the story is more complex than THE FIRE CAT. Things aren't so simple in this book. Not everything turns out perfectly and happily ever after in the end. But once again, a flawed and awkward main character chooses to embrace the greatness she has within.

As I got older, I loved (and still love) ALICE'S ADVENTURES IN WONDERLAND by Lewis Carroll and THE ADVENTURES OF HUCKLEBERRY FINN by Mark Twain. I loved A WRINKLE IN TIME by Madeline L'Engle and THE PHANTOM TOLLBOOTH by Norton Juster. I adored WORD CHANGER by ?? and NIGHTFALL by Isaac Asimov (actually, I'm not sure if that last one is considered children's literature, so maybe I'm cheating...) And one of my newest favorites is SPECTRAL by Shannon Duffy. (You can read my review here.)

I could list hundreds of books... but my thirty minutes are up. Suffice it to say, I've realized that there is one common thread that binds together all of my favorite books over the years. I'm drawn to books with characters who have a seed of greatness within them, even though they may not see it themselves at first. I love characters who are flawed and awkward, who want to do Big Things but fumble and stumble and mess everything up because they don't know how to be the person they want to be. I love to step into their stories and cheer them on as they find the courage to make the hard choices... to become the great people they were destined to be. But I wouldn't love them so much if they were perfect. They are the loveable geeks, the misunderstood and quiet folks that others might overlook, the characters that might someday grow up to be powerful, influential people. But not yet.

Now, I just need to make sure my characters are adorkable, and not simply awkward. As a former adorkable character, I'm ready to take on that challenge!
Posted by Veronica Bartles at 10:35 PM