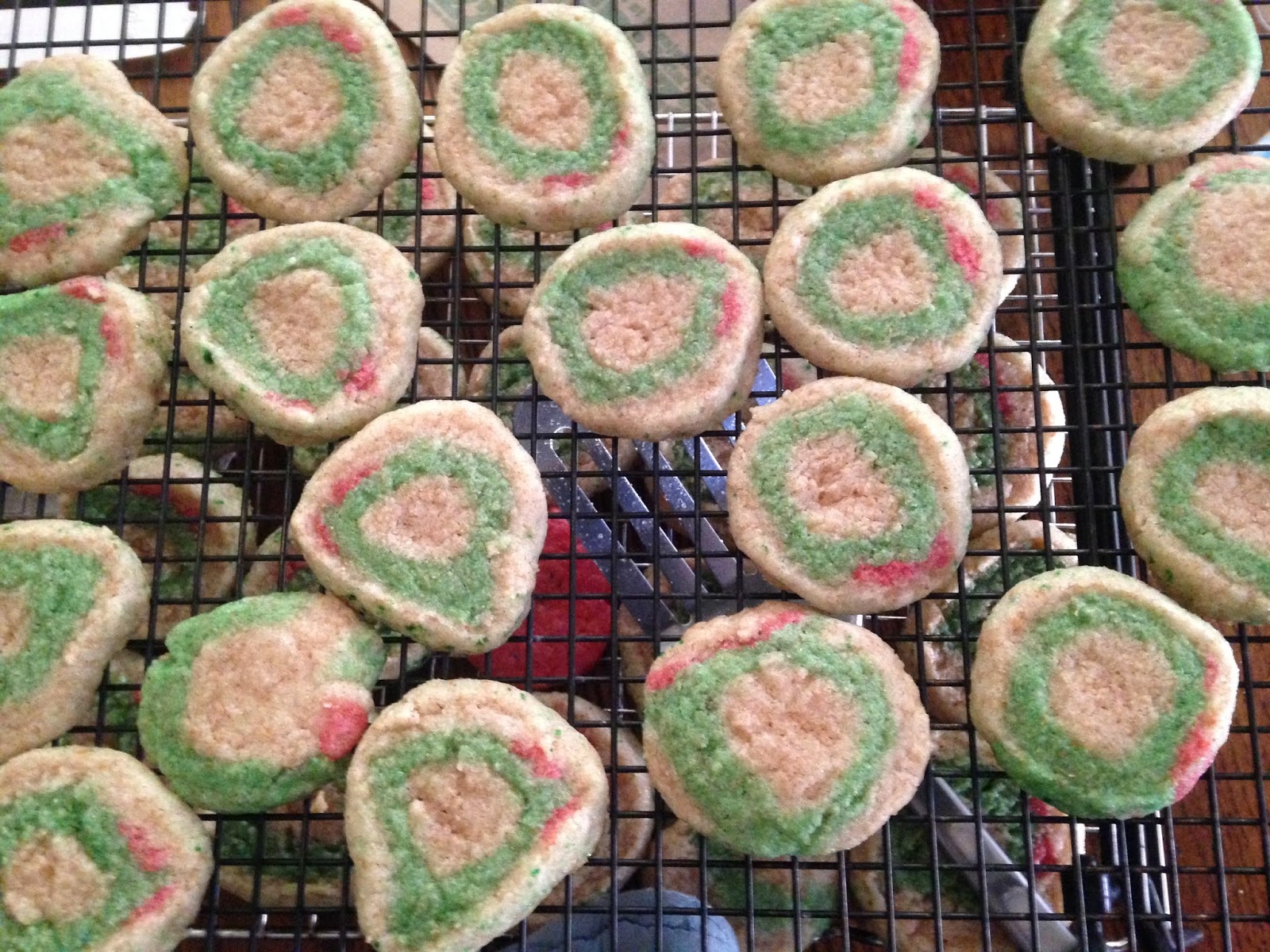 When I shared a picture of my Christmas cookies on Twitter, several people asked me to share the instructions for making the Christmas wreath slice-and-bake sugar cookies. The process is actually fairly simple, and though it takes longer to prepare the cookies for baking, they actually save time, because you don't have to decorate them once they're baked! 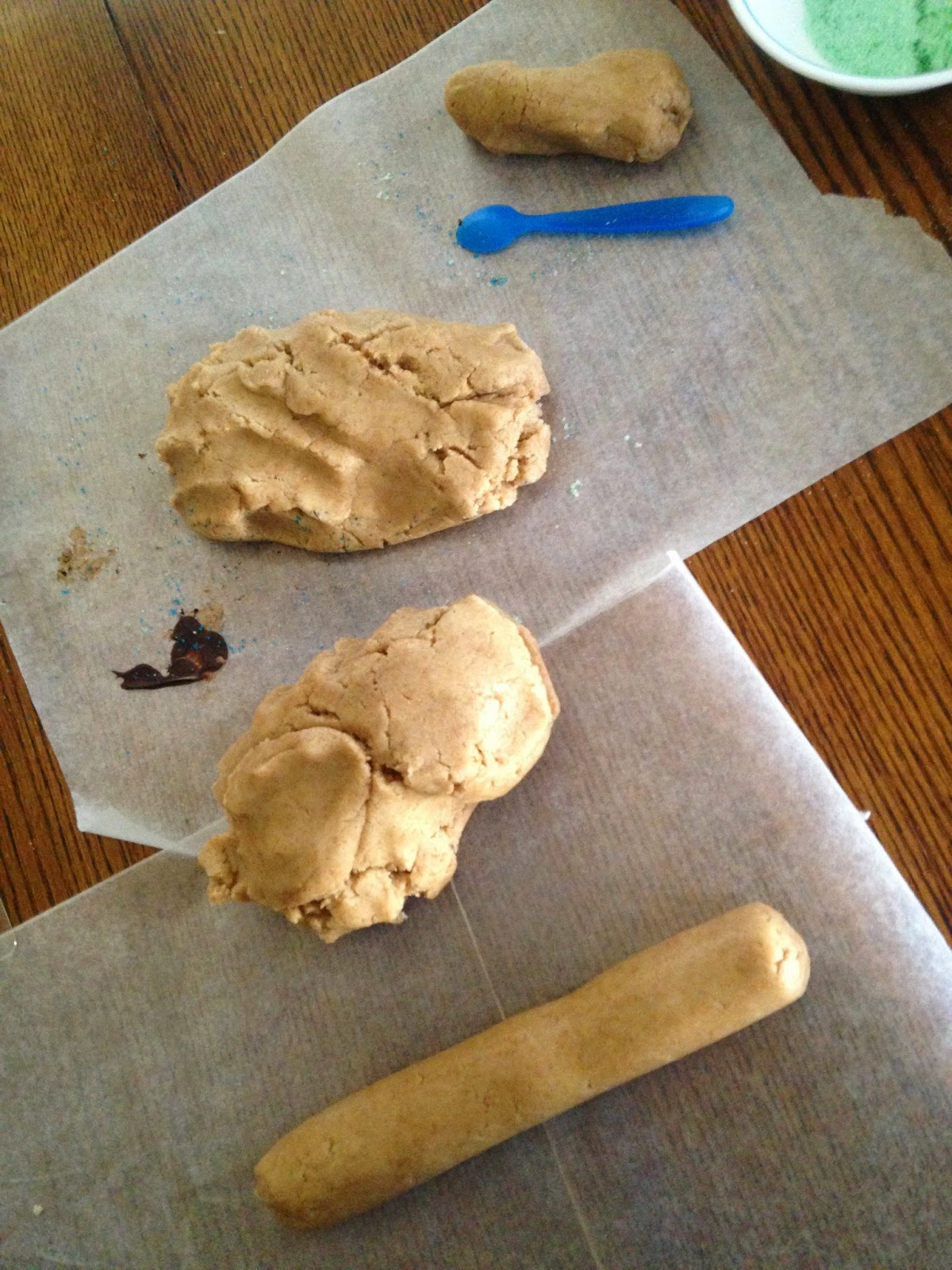 Divide the dough into thirds, and then divide one third into two portions (one of these portions should be significantly larger than the other) 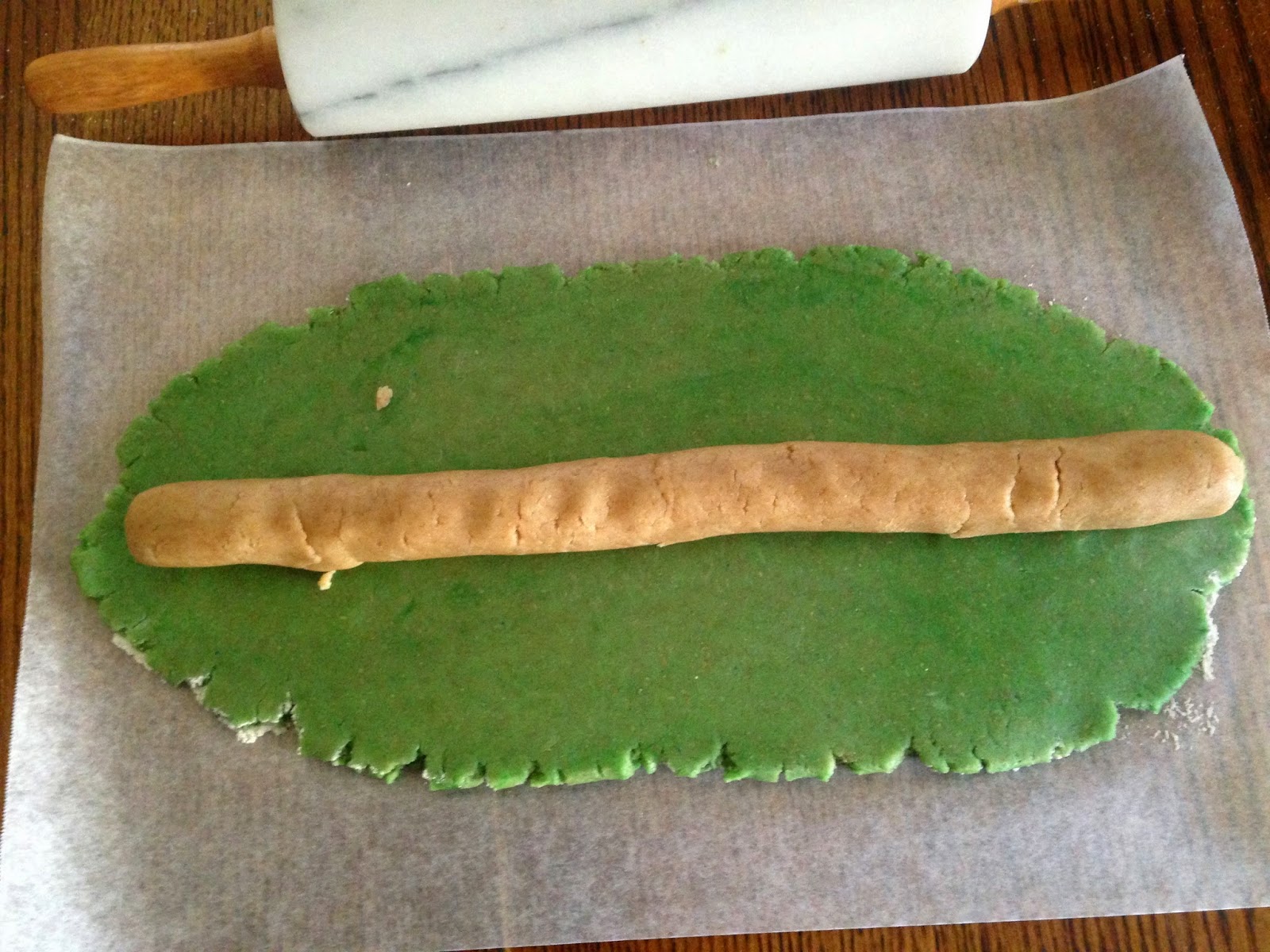 Roll out the green dough on a piece of waxed paper to a rectangle as long as the log of untinted dough and wide enough to wrap around the circumference. 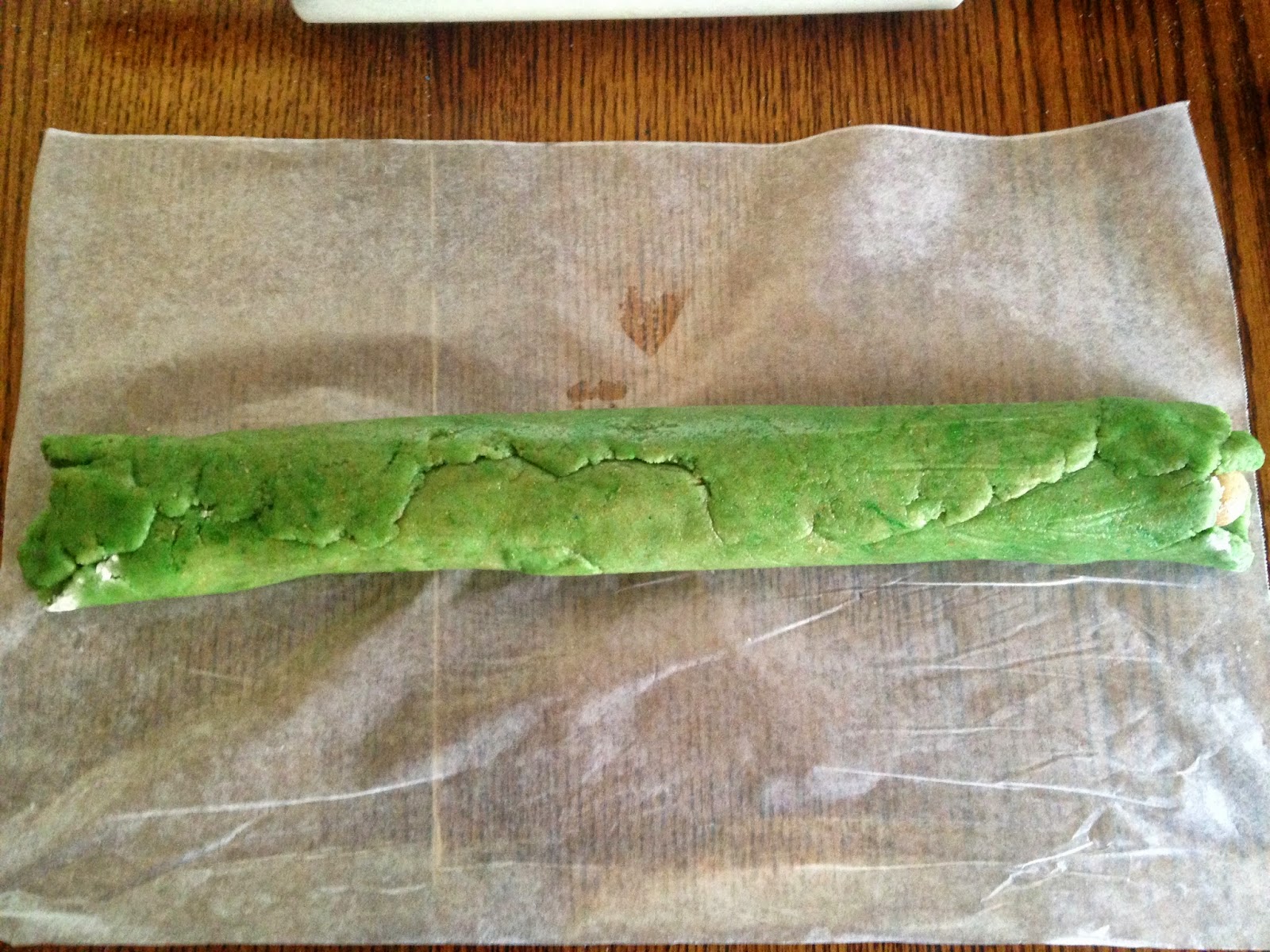 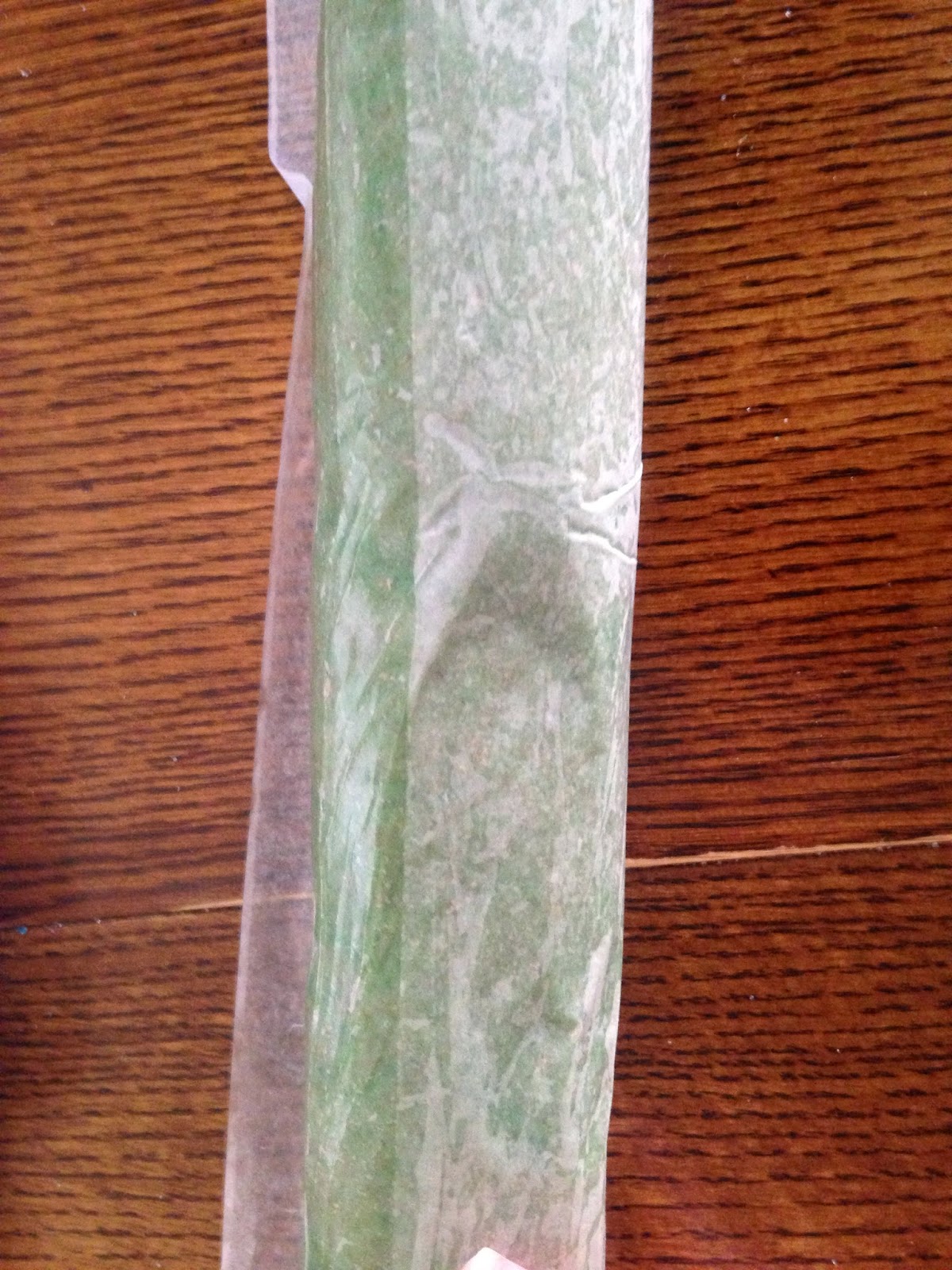 Wrap the green dough around the untinted dough, and wrap tightly in the plastic wrap to squeeze the dough together. 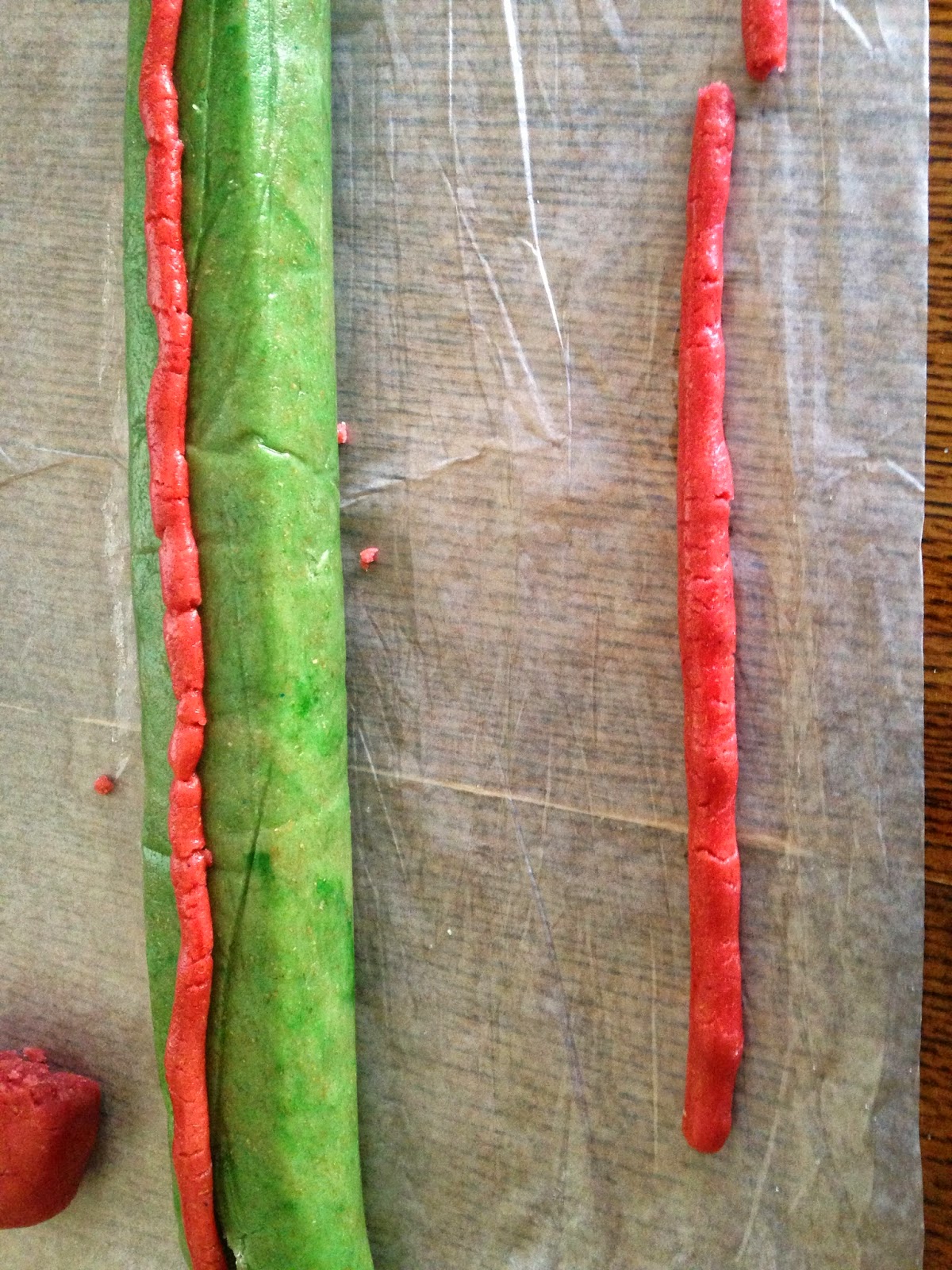 Roll the red-tinted dough into three long, skinny ropes, as long as the dough log. (I always end up tinting more dough red than I actually need. If you do that too, you can set the excess red dough aside to bake later.) Put the red dough ropes onto the outside of the green dough and press slightly to adhere it. (Don't worry about squishing it in too much at this point. You don't want to flatten it.) 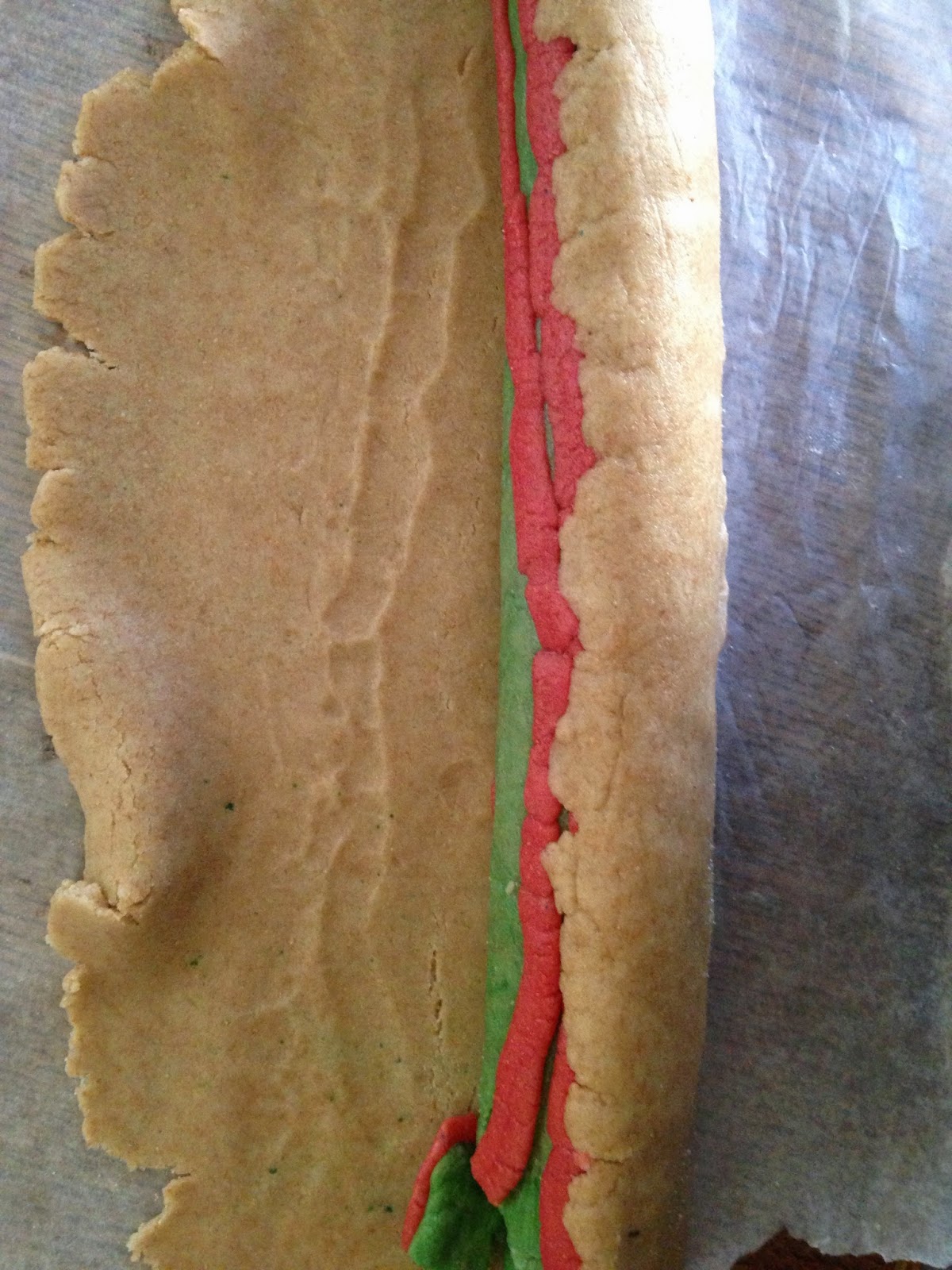 Roll the remaining untinted dough into a large rectangle, and wrap around the green and red dough. 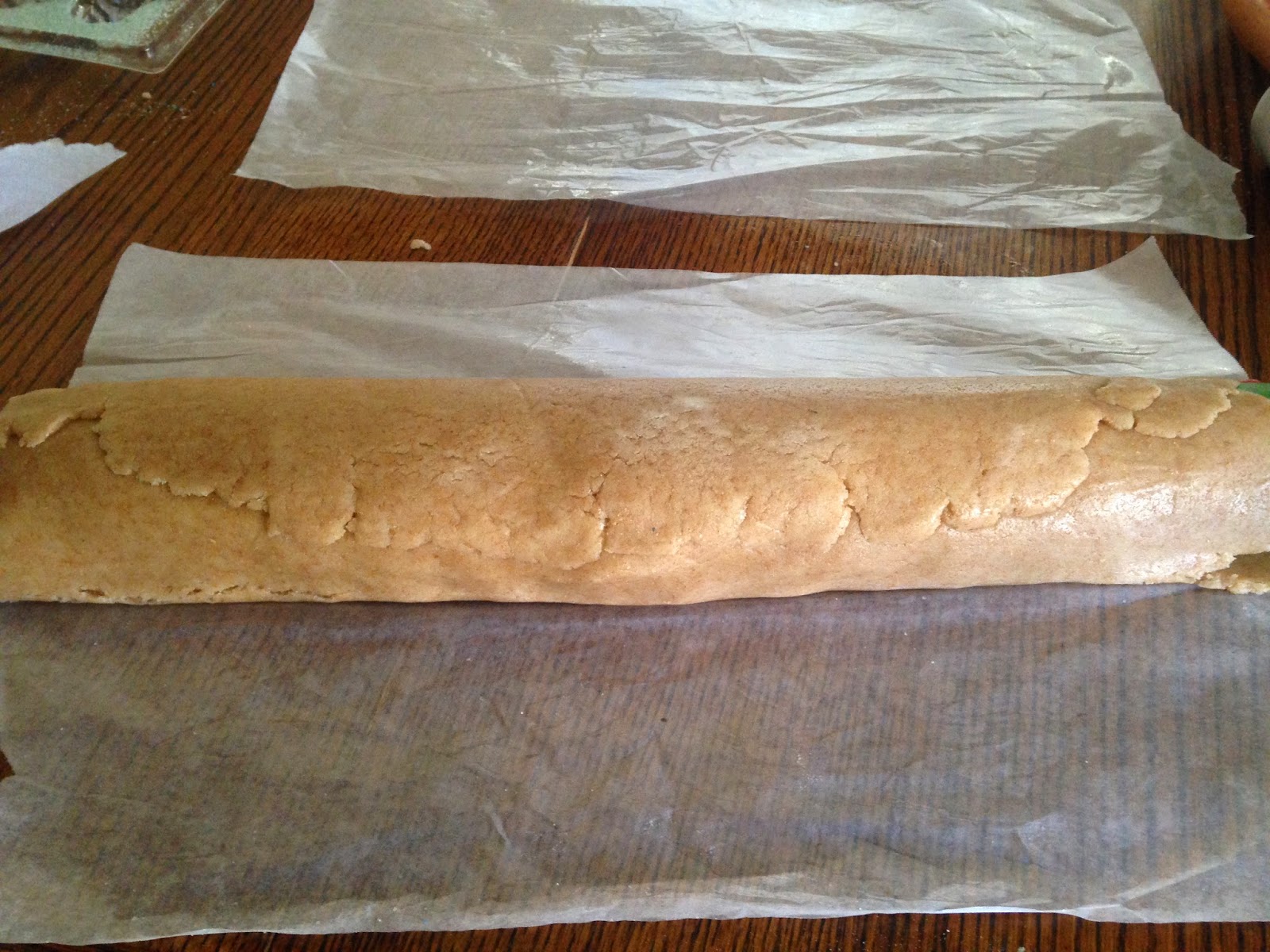 Your dough log will likely be too thick at this point. (Mine had a diameter twice as big as I wanted.) You'll want to roll the dough a bit to reduce the size, but I found that it was a little awkward to handle the whole thing at once. I cut it into 4 sections and rolled each one separately to make it half as thick and twice as long. 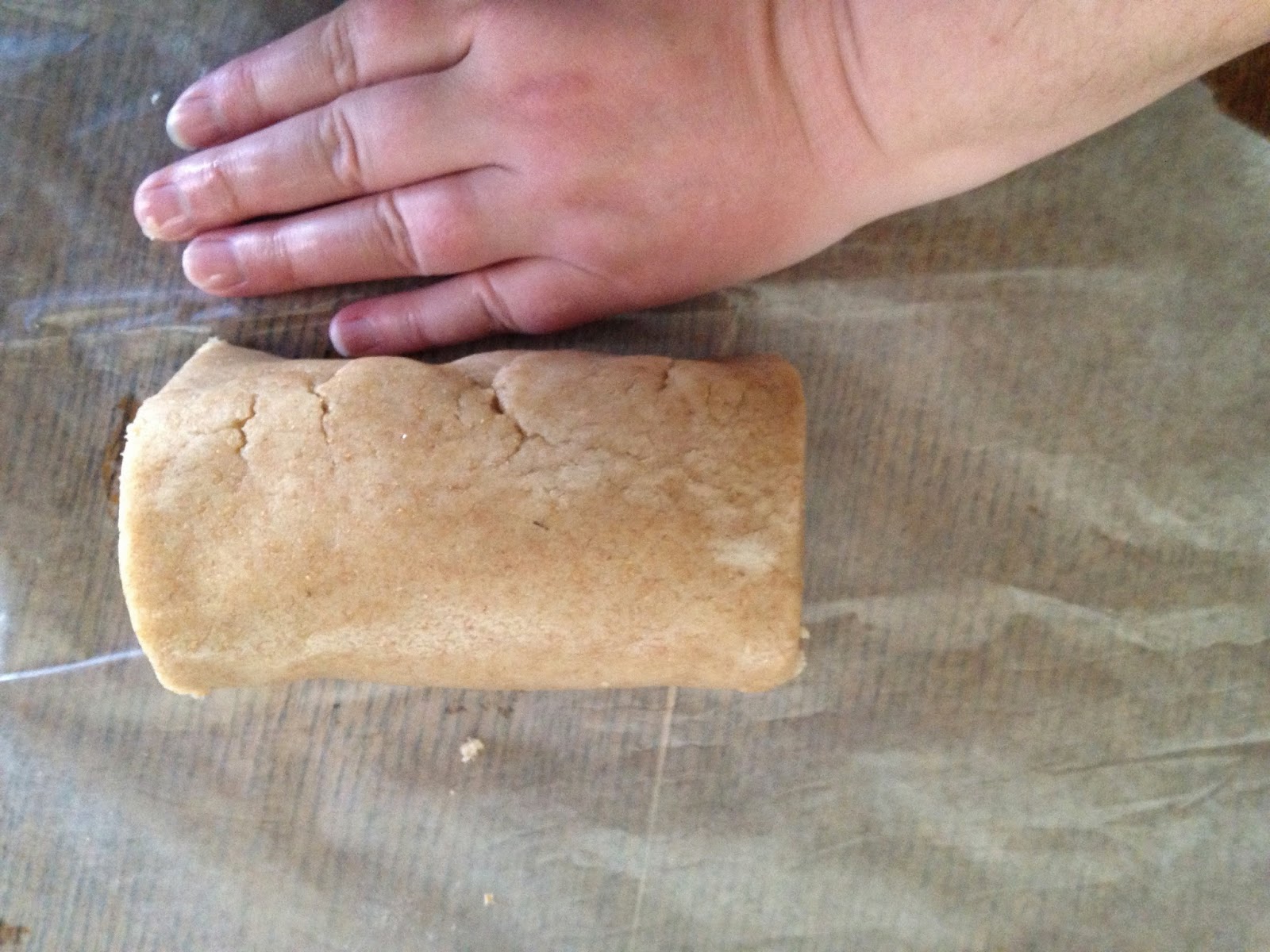 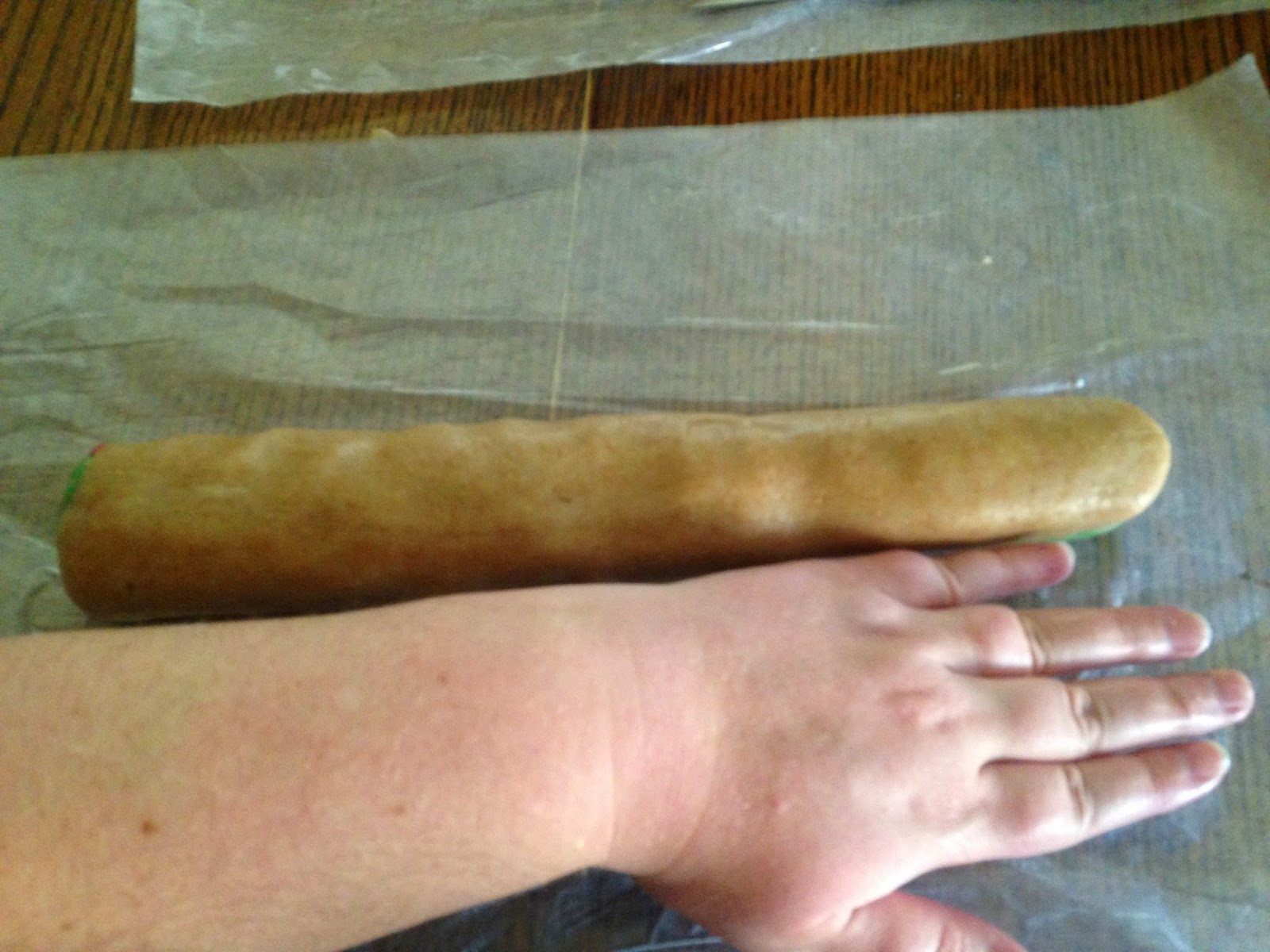 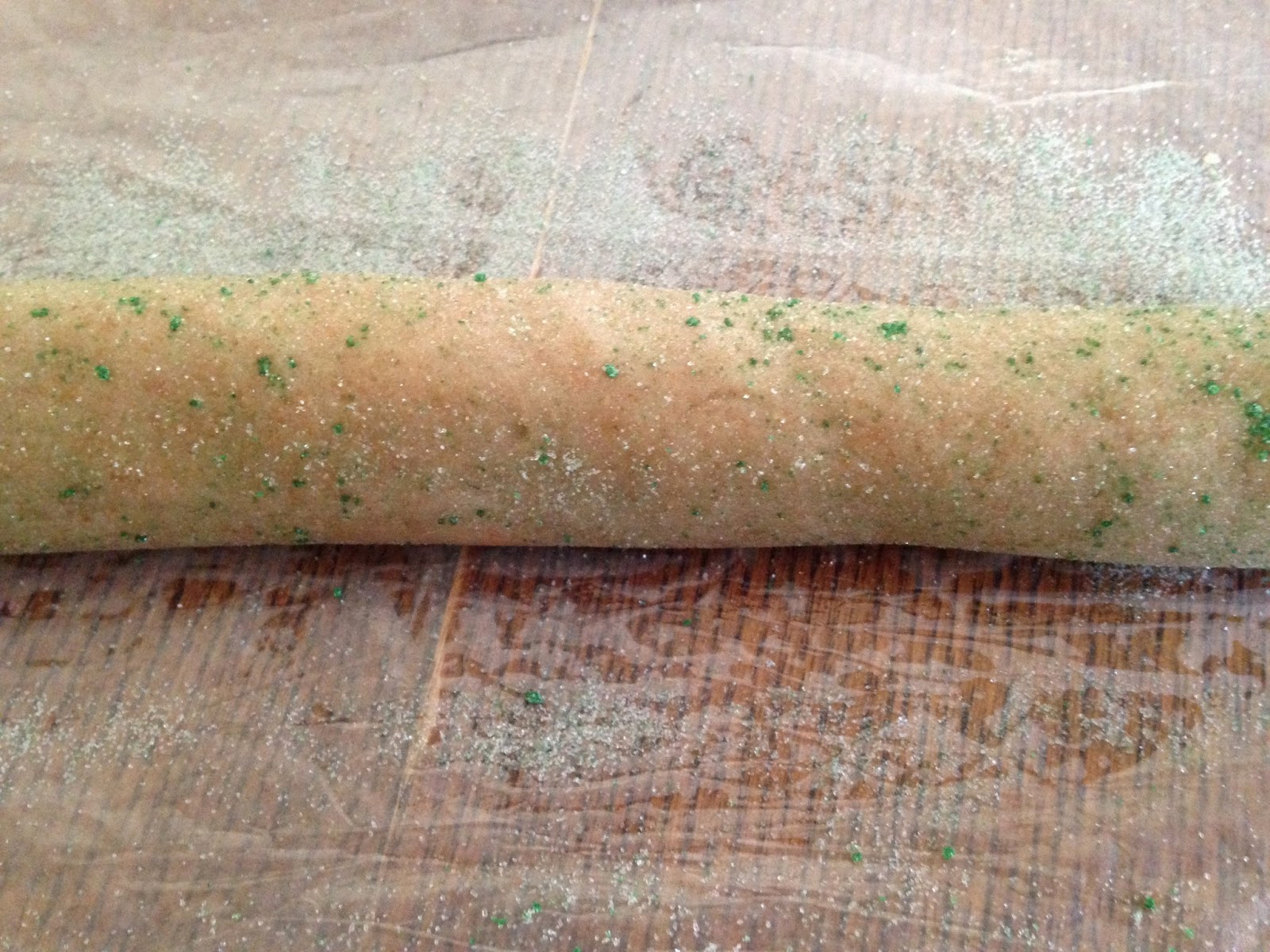 If you want, you can roll the log in colored sugar for an extra bit of fun. Then, slice into rounds with a sharp knife and bake as directed. 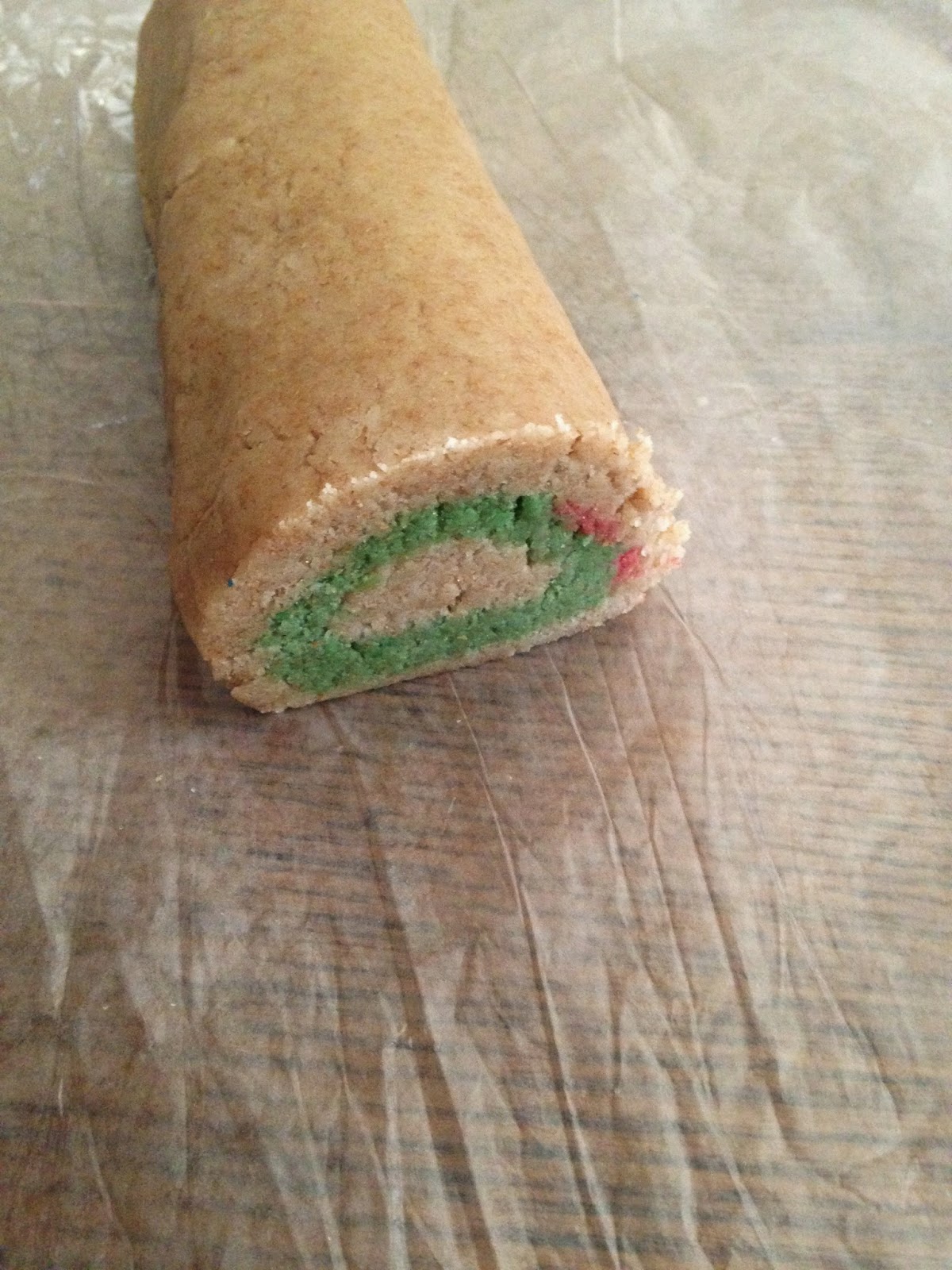 Cream butter and sugar together until light and fluffy.

Wrap dough with plastic wrap (I prefer to form the dough into a flat disc, rather than a ball, to make it easier to roll out after chilling) and chill in refrigerator for 5-6 hours, or overnight.

Roll out dough and cut into circles. Bake on greased or parchment-lined cookie sheets for 8-10 minutes, just until lightly browned on the bottom, but still creamy white on top. (Don't over bake, or the cookies won't be soft!)

Posted by Veronica Bartles at 9:34 PM