See? What did I tell you? Life has a way of getting in the way, and between the extra craziness of the kids having a delayed start to the school day (due to inclement weather) and the way I got so wrapped up in the manuscript I'm critiquing for a friend right now (seriously, guys, it's amazing - I can't wait until it gets published so I can tell you all about it)... I completely forgot to post the book review I had written for yesterday. (If anyone can tell me how to schedule a post in blogger and make it actually appear on the blog on the day and time that I schedule it for, please let me know!! This is crazy!) 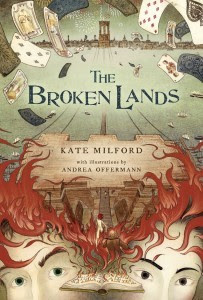 I recently read THE BROKEN LANDS by Kate Milford, illustrated by Andrea Offermann.

In this prequel to The Boneshaker, fifteen-year-old Sam Noctiluca spends his days hustling cards on Coney Island, and he’s good at what he does. But he dreams of doing something big and important with his life, something his father, who died while helping to build the Brooklyn Bridge, would be proud of. When evil forces threaten New York City, it’s up to Sam and his new friend, Jin, a Chinese girl with a talent for pyrotechnics, to bring together the five people who can keep the city from falling. These five “pillars” must work together to claim the control over the city before evil can take hold.

This book wasn't exactly my cup of tea. It was very well-written, with strong imagery and captivating language, but supernatural suspense tales like this aren't usually the kinds of books I prefer, and I must confess that I didn't enjoy it as much as I wanted to. Perhaps, if I had read The Boneshaker, it would have been easier to get into this one, but I didn't realize it was a prequel when I received this copy for review.

Though the novel starts off very slowly, as Milford sets the stage for the epic battle between good and evil on the still-under-construction bridge, the suspense and sense of danger gradually builds until even I had trouble putting the book down in the last third of the story. The characters gradually grew on me, and Milford succeeded in making me care about the outcome of the battle in the end. Offermann’s haunting illustrations add to the dark mood of the novel, pulling the reader into the fantastical world of Milford’s nineteenth-century New York and setting the chilling tone for the climactic battle on the bridge as Sam, Jin and their friends take on and defeat the demons who would make New York City their own.

Reminiscent of folktales from early American literature, such as “The Legend of Sleepy Hollow,” this story of love, courage and friendship might appeal to history buffs and lovers of the fantastic and the supernatural. Since I don't often read this genre, I don't have any current titles to compare it to (sorry!), but it would probably appeal more to fans of Bram Stoker's Dracula than to the fans of Stephanie Meyer's Twilight series.
Posted by Veronica Bartles at 8:50 AM