What's in a Name? Titles Do Matter!

In preparing for our big move, I've been sorting through all of my old files this week, getting rid of the excess. In the process, I've made some fun discoveries (the story with which I won first place in the Wyoming Young Author's contest in first grade) and some eye-opening revelations (turns out, the idea for the YA novel I started writing in 2008 was sketched out in a short story I wrote way back in my junior year of high school!)

Then I came across a stack of clippings from my brief time as a staff writer for a small-town weekly newspaper in Gillette, Wyoming.


Now, I have to admit that choosing titles has never been an easy task for me, but I know that a title can make or break your story. I was particularly proud of the headline I came up with for my first published article: "Wright does it right for Wright Days 96." 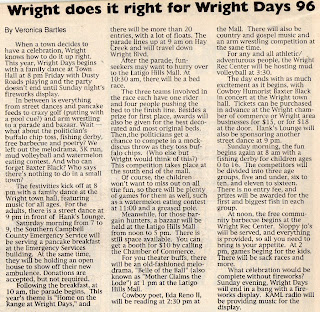 The article was just a basic write-up with information on the upcoming festivities, but the headline was catchy enough to draw attention to my small article at the bottom of the page. Response to my first article was positive enough that I received another assignment﻿ for the next issue. This time, however, my editor changed the headline just before publication, because my original suggestion (something along the lines of "Runners Enjoy Fajitas after the Annual Nose Run") wasn't catchy enough. However, the headline that appeared in the paper ("Nose runners eat fajitas") conjured up a plethora of unpleasant images. Even though this second article was better written and featured at the top of a two-page spread in the paper, complete with photos, the biggest response received was, "That headline was kind of gross." 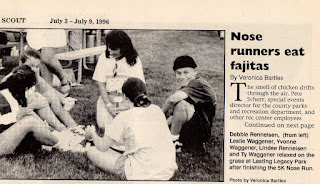 I learned two lessons from this experience that influence my writing today:

1. Don't be afraid to stand up for yourself! I was very uncomfortable with the re-written headline, but I was young and insecure, and I was afraid to say anything. After the issue was published and public response to my article was less-than-positive, my editor asked why I hadn't pointed out the gross-factor of her headline. My only excuse was fear. If I had spoken up, we probably could have come up with something clever and catchy together.

2. First impressions mean a lot! Even though my second article was the better of the two, most people never discovered that, because they were put off by the headline. You wouldn't wear torn jeans and a stained t-shirt to a job interview. Take the time to dress your stories for success as well, with the best title for the tale.
Posted by Veronica Bartles at 9:11 AM

Email ThisBlogThis!Share to TwitterShare to FacebookShare to Pinterest
Labels: writing