I'm Amity - What Faction are You?

I love a book that makes me think.  One that asks questions that make me ponder long after I’ve finished the last chapter.  A book that makes me wonder: what would I choose? Who do I want to be? DIVERGENT by Veronica Roth is one of those books.
I have to admit, I was hesitant to pick it up.  I loved HUNGER GAMES by Susanne Collins, I devoured MATCHED by Ally Condie, and I enjoyed UGLIES by Scott Westerfeld… but as my close friends and family can tell you, I’m the kind of gal who likes to focus on the rainbows and bubbles of life.  I can only handle so much dystopia before I go screaming for something bubbly and pretty!


For months, I passed DIVERGENT on the shelves of my local bookstore and the library.  I was tempted to pick it up, simply because anything written by someone named Veronica already has a giant plus going for it (right?)… but I didn’t want to immerse myself in yet another “look at how horrible society will be in the not-so-distant future” series.  So I left it on the shelf.  I didn’t even pick it up to skim the first page.


Until, a couple weeks ago, I started seeing people tweeting about the upcoming sequel, INSURGENT.  People were choosing their “factions” and joining teams, and I wondered what the hype was all about.  So just for kicks and giggles, I did a google search to figure out what all of these “factions” were.


In Roth’s dystopian world, society has divided into 5 factions, each determined to make the world a better place by embracing one specific value.  Candor (the honest), Abnegation (the selfless), Dauntless (the brave), Amity (the peaceful), and Erudite (the intelligent).  I immediately knew that I would choose Amity.  From the Amity Faction News blog, I found this definition.  “The Amity faction values peace and friendship. Artistic, creative, and musical, this faction focuses on peacekeeping, harmony, and farming.”  Other than the fact that I can kill a plant just by looking at it (serious black thumb) and would never survive as a farmer, this defines me.  So I declared myself a part of Team Amity and joined the hype for the upcoming release of INSURGENT, promising to write a blog post all about why I chose the Amity faction.


But wait!  I still hadn’t read DIVERGENT! I realized that, even though I wasn’t trying to join the Candor faction, I wasn’t comfortable with promoting a book (or series) I honestly knew nothing about.  So I scoured my local library… but every copy was checked out, and the waiting list was long.  I could go buy the book, but did I really want another dystopian novel on my library shelves?  I decided I’d rather wait a few days to see if I could find a copy.


Finally, this weekend, I got a notice in my email that the library had a copy of DIVERGENT on hold for me.  I picked it up and read the first five chapters.  But when I set it down for a second, my daughter immediately picked it up and didn’t want to give it back. I had to buy a copy so that we could read it at the same time!


As I followed Tris on her journey of self-discovery, I found myself questioning my faction choice. Would I have been happier in Candor? Erudite? Dauntless? Abnegation? I don’t think I’m the only initiate to wonder if I chose the right faction for me.  I watched Tris and her friends go through similar struggles as they tried to make sense of this new phase in their lives….


But I’m happy to report that, at the end of the day, I’m proud to be a part of the Amity faction. It’s truly where I belong. And besides, Four thinks I’m beautiful J 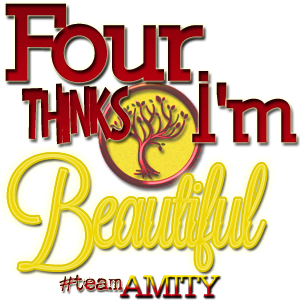 (If you don't know what that all means, go read the book! I promise you'll love it!)
Posted by Veronica Bartles at 1:48 AM